Jake Adam York reads poems in and near Montgomery and Anniston, Alabama, in January 2010. York's poetry reflects on acts of violence that occurred in these areas during the Civil Rights Movement. It seeks, as well, to discover the ghosts that remain in Alabama and to find ways to answer them.

Raised near Gadsden in northeast Alabama by his steelworker father and his mother, a history teacher, Jake Adam York studied architecture and English at Auburn University. He received an M.F.A. and a PhD in creative writing and English literature from Cornell University. At the time of the recording of these videos, he was an associate professor of English at the University of Colorado, Denver, where he directed the creative writing program. York's books of poetry include Murder Ballads (2005), A Murmuration of Starlings (2008, and Persons Unknown (2010). His poems appeared in various journals, including Blackbird, Diagram, Greensboro Review, Shenandoah, The Southern Review, and Third Coast. 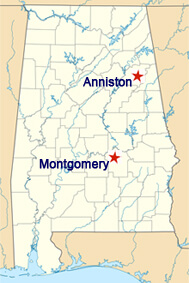