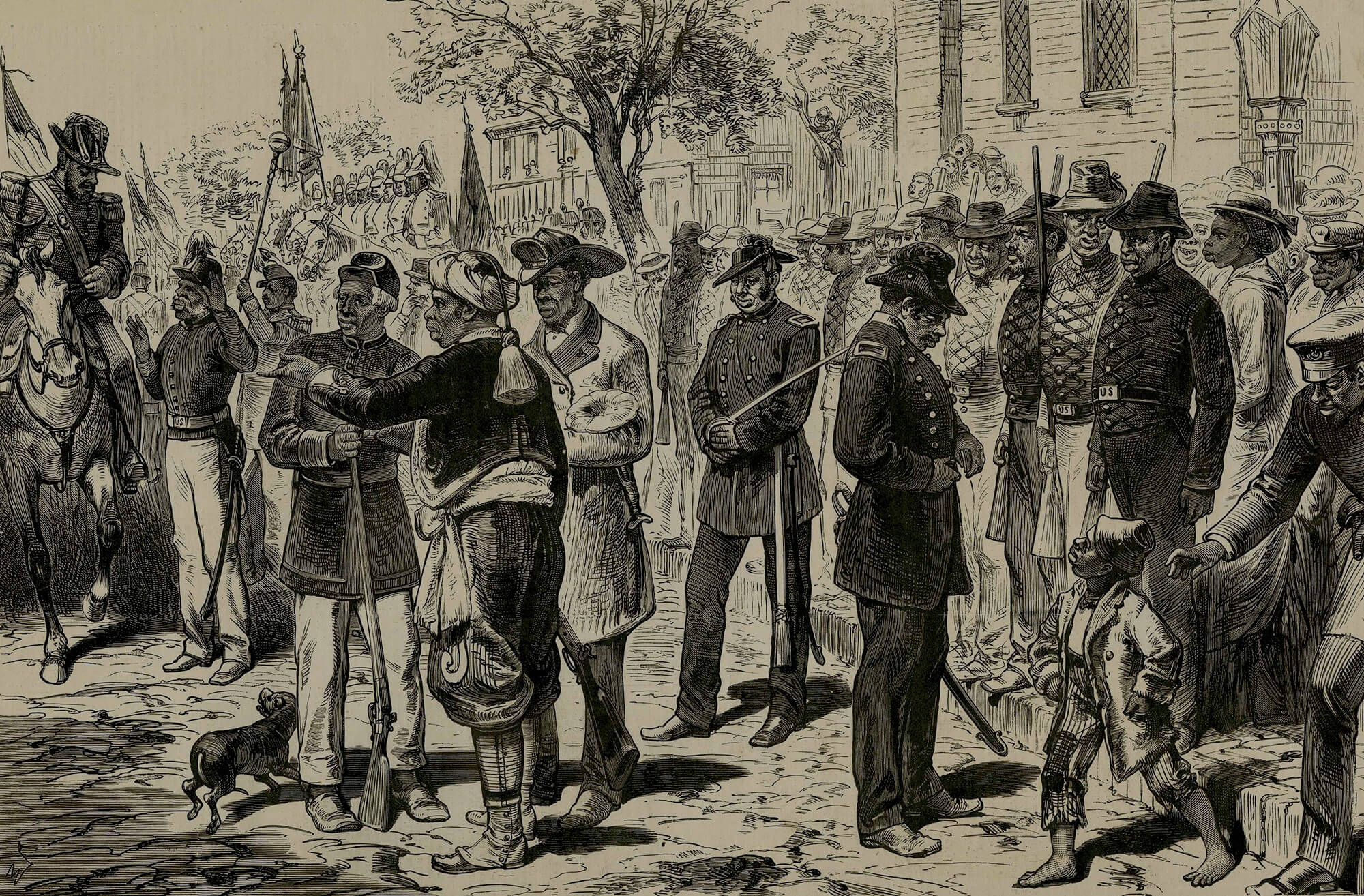 Historians Ethan J. Kytle and Blain Roberts, professors at California State University, Fresno, have produced a brilliantly written and thoroughly engaging place-based exploration of competing narratives of racial enslavement. From 1865 to the present, two starkly contrasting histories of slavery have competed in Charleston, South Carolina, the setting for Denmark Vesey's Garden: Slavery and Memory in the Cradle of the Confederacy. The whitewashed narratives of former slaveholders and their descendants have had the upper hand for most of the more than 150 years covered by Kytle and Roberts. Propounded at different times and from different angles, this long-dominant chronicle has downplayed slavery or cast it as a benevolent and civilizing institution. The common theme is a silencing of inhumanity and brutality. This version of human bondage, nurtured in Charleston and fostered by proponents in the former Confederate states as part of the Lost Cause tradition, has had broad white appeal and enduring impact. Its influence, Kytle and Roberts write, extends north and west of the Mason-Dixon Line and strongly persists to the present, as evidenced by the intense racial animus that led a white supremacist to murder nine worshippers in Charleston's venerated Emanuel African Methodist Episcopal Church on June 17, 2015.

The counter-narrative chronicled in Denmark Vesey's Garden insists on recognizing slavery as a horrific form of human tyranny, the impact of which has endured long after emancipation. Former slaves, their progeny, and some black and white allies have offered this alternative. Charleston's ex-slaves expressed the counter-narrative in vibrant public festivals and Emancipation Day celebrations near the end of the Civil War and throughout Reconstruction, reflecting the freedmen and women's hard-won emancipation, expanding political consciousness, and support by an occupying federal military force. Briefly in the postbellum years, this alternative history achieved preeminence in Charleston's local reckoning with slavery. However, the ascension of Jim Crow drove Charleston's black narrators and their truth-be-told accounts of bondage from the public sphere for many decades, complicating but not thwarting Kytle and Roberts' efforts to trace the counter-narrative's lineage.

The burgeoning civil rights and black power movements of the 1960s and 1970s, coupled with a seismic shift in municipal politics, created conditions and commemorative opportunities in Charleston more favorable for expressing the unvarnished version of enslavement. A large population of newly enfranchised blacks allied with the Democratic Party, and with their support Charleston voters bucked the Republican tide that was sweeping the "Solid South" (286). In early 1976, spurred by black activists and supported by the city's newly elected progressive white mayor, Joseph P. "Joe" Riley Jr., the city council commissioned a painting to memorialize Denmark Vesey, a free black artisan who in 1822 organized a major, unsuccessful slave insurrection in Charleston. Vesey, a leader in the local African Methodist Church, invoked Biblical teachings to recruit followers for an armed rebellion and mass exodus to Haiti, where its revolution served as a model of emancipation and the independent, black-led nation was a beacon for enslaved Charlestonians seeking freedom. Kytle and Roberts describe Vesey as Charleston's first black militant, a potent symbol of resistance who inspired antislavery activism and proslavery, states' rights reactions (284).

Vesey's dual legacy, evoking admiration and terror, was evident in Charleston over 150 years later, when a sharply divided local response to his commissioned portrait revealed the longstanding differences in slavery's public memory. A war of words ensued after the painting's dedication in September 1976, and the artwork was stolen, recovered, and rehung at a higher placement to stave off would-be vandals and thieves. When the city installed a second tribute to Vesey—a life-like statue erected in a municipal garden in 2014—opposition to commemorating the anti-slavery insurrectionist "had been largely silenced, at least publicly," according to Kytle and Roberts (336). A small but vocal group of Charlestonians opposed the Vesey monument, but they were the exception, and, at least for the moment, a local shift in narrative authority displaced their public interpretation of the past.

Kytle and Roberts investigate the linkage between power and the production of history in Charleston and render a compelling judgment about which version of slavery is more accurate. Denmark Vesey's Garden, the authors acknowledge, is propelled by their "belief that the unvarnished tradition of remembering—which has long competed with the whitewashed tradition, though rarely on equal ground—is superior" (6). Among the grim realities of slavery in Charleston, as summarized by Kytle and Roberts, were heavy trafficking in human beings at the city's slave markets, slave owners who had virtually unlimited rights to inflict violence and other abuses on bondsmen and bondswomen, and merciless punishments meted out in Charleston's Work House, where masters sent enslaved people for particularly harsh discipline. A giant treadmill served as a feared torture instrument; on it, twenty-four black men and women shackled to an overhead rail trudged eight hours a day, crushing corn underneath their steps, and were subjected to an overseer's whipping if they fell behind (22).

Charleston's antebellum history as the capital of a slave society and a fount of proslavery ideology prefigured the production of white supremacist historical accounts of the "peculiar institution" by its local defenders following the Civil War and throughout the postbellum years. The city's master class, in the decades preceding the war, coalesced around a defense of black enslavement that touted white racial superiority and a belief in slavery's humanitarian benefits. A rising tide of northern abolitionism and mounting concerns about slave insurrection in their immediate environs, most notably the Vesey plot, prompted a shift from the notion that slavery was a "necessary evil." South Carolina senator John C. Calhoun, revered by white Charlestonians, argued in 1837 that slavery was a "positive good" that benefited both masters and slaves (96). White Charlestonians seeking to memorialize Calhoun and pay homage to his beliefs erected two posthumous statues of him, in 1887 and 1896. Calhoun's detractors repeatedly vandalized the first monument, after which a second sculpture was placed on a high pedestal. This challenge and response was a minor skirmish in the long-running and largely one sided contest between historical narratives chronicled in Denmark Vesey's Garden. For generations to come, Calhoun's white supremacist beliefs and Christian paternalistic ideology regarding slavery persisted in numerous forms and venues in Charleston.

Kytle and Roberts inventory various iterations of the dominant slavery narrative and provide valuable details that include microhistories of the "artisans of different kinds" who in large part controlled the historical production process.1Michel-Rolph Trouillot, Silencing the Past: Power and the Production of History (Boston, MA: Beacon Press, 1995), 25, 96. Trouillot, in his historiographical analysis of silencing the past, uses the term "artisans of different kinds" to refer to narrators other than professional historians whose historical accounts "augment, deflect, or reorganize the work of the professionals." These artisans, among them "politicians, students, fiction writers, [and] filmmakers," figure prominently in the production of dominant historical narratives and the perpetuation of historical silences, such as erasures or banalizations of slave rebellions in Haiti and elsewhere. Among the narrators and their versions: Confederate veterans and local white politicians whose Lost Cause narratives discounted the importance of slavery as a cause of the Civil War and posited that emancipation would have been inevitable regardless of the conflict; United Daughters of the Confederacy officers and members whose instructional materials for school children described chattel slavery as a benevolent system of caring masters and devoted servants; Charleston boosters in the 1930s whose tourist brochures for "America's Most Historic City" featured an elderly black man on its cover, hat in hand, opening a wrought-iron gate accompanied by text that omitted any mention of enslaved people; and the all-white Society for the Preservation of Spirituals, whose members had been "reared under the plantation traditions" and whose public performances and interpretations of African American spirituals as late as the mid-1950s served to perpetuate the trope of the faithful and contented slave (204).

The net effect of these accounts of Charleston's past was a long silencing but not a permanent erasure of slavery's atrocities and enslaved people's freedom struggles. Denmark Vesey's Garden shows convincingly that the way in which white and black Charlestonians produced alternative narratives of the past represents an uneven but evolving distribution of historical power. "As Charleston proves better than any American city, the memory of slavery has always been fraught and contested ground" (349). The book's title, which refers to the site selected in 2014 for the Denmark Vesey sculpture, also evokes the shared place and separate pasts in "America's Most Historic City." The monument's placement in a garden within Hampton Park, which white Charlestonians named in honor of Wade Hampton in 1903, is an ironic spatial juxtaposition of dueling versions of slavery. Hampton, a Confederate cavalry general during the Civil War, was one of the South Carolina's largest slaveholders when the opening shots were fired in Charleston in 1861 and a forceful proponent of white supremacy during his postwar political career, which included two terms each as governor and US senator. The coexisting tributes to Vesey and Hampton in a city park represent a shift in narrative authority in Charleston but also serve as a reminder of violent conflicts in the past and deep rifts in the present. The massacre at the Emanuel African Methodist Episcopal Church in 2015 suggests that the recent recalibration of history described by Kytle and Roberts is the latest chapter of a long-running saga and not its conclusion.

Daniel A. Pollock, MD, is a medical epidemiologist at the Centers for Disease Control and Prevention (CDC) in Atlanta, Georgia, where he leads a unit responsible for national surveillance of healthcare-associated infections. Since arriving in Atlanta in 1984, he has pursued an independent scholarly interest in the city's Civil War history, and he has conducted over 150 tours of Battle of Atlanta sites. Pollock is the author of "The Battle of Atlanta: History and Remembrance."

"Whose Heritage? A Report on the Public Symbols of the Confederacy." Southern Poverty Law Center. Accessed January 31, 2019. https://www.splcenter.org/data-projects/whose-heritage. 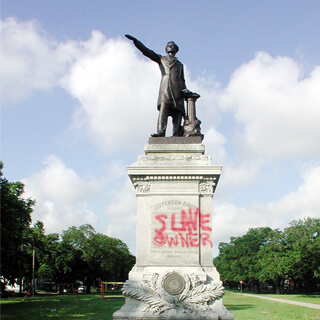 Iconoclasm and the Confederacy: The Challenge of White Supremacy in the Memorial Landscape 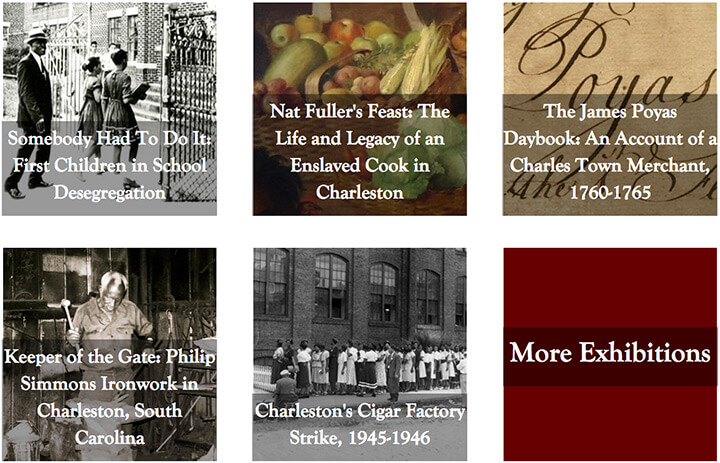 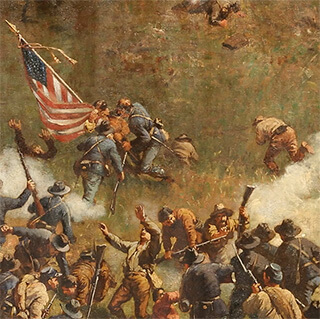