"Wounds, Vines, Scratches, and Names: Signs of Return in Southern Photography" is part of the 2011 Southern Spaces series "Sightings: Architecture, Art, and Artifact," a collection of reviews and essays examining visual representations of the US South in museums, landscapes, and media. Series editors: Lisa Goff and Grace Hale.

Something magical is on display in a tiny gallery at the University of Virginia Art Museum, a small selection of photographs that play off each other like the ingredients in a Mark Bittman recipe. Photographer and UVA professor William Wylie has grown a visually and emotionally rich exhibit out of the limited collections of the museum, some key loans, and the seemingly dead idea of southerners’ “distinctive sense of place.” The six photographers assembled here—Shelby Adams, William Christenberry, Emmet Gowin, Sally Mann, Pamela Pecchio, and Jeff Whetstone—are a smart mix of canonical, mature artists and talented younger photographers. They are all “from” the South, where they have all lived and done important work. But for Wylie, their “southernness” lies less in these geographical facts than in their process and practice of return and the way their works layer space and time to evoke loss.

All photographs play with time. They highlight its flow, capturing a present that passes even as the shutter closes. They evoke loss. But because a photograph exists, a former present—now past—can return again and again. Because the photograph does not let its piece of the past go, it also soothes and assuages loss. The photographers assembled here share a practice of layering, reworking, and revisiting people and places that foregrounds photography’s jumbling of time. In very different ways, they hold the place or person—the subject—steady so time can float free.

The most concrete example of this practice is Christenberry. This exhibit originated in the museum’s desire to display the six vintage prints, shot in Hale County, Alabama, in the 1970s and developed at a drugstore there, that it had recently purchased. Displayed with six more Christenberry prints donated to the museum, these photographs evoke Christenberry’s well-known practice of return, of repeatedly revisiting the same sites in Hale County. The six photographs on display here of Coleman’s Café in Greensboro in 1971, 1972, 1975, 1977, 1978, and 1980 literally show how the passage of time marks this wooden structure and its immediate surroundings. Lined up horizontally on a short wall, the shots evoke the single frames of a strip of movie film. As the viewer moves closer, the details that change from print to print become clear. At an intimate distance, the multiple Coleman’s Cafés suggest a child’s annual school photos. Holding the frame and the subject steady, these images highlight the material signs of time’s passing.

The exhibit hangs in a rectangular gallery that the room’s structure divides exactly in half. In the first half, Wylie has hung the show’s “historic” images—four Adams photographs of Eastern Kentucky from 1986-1988, the Christenberry prints ranging from 1973 to 1980, and Emmet Gowin’s images of his family in Danville, Virginia taken between 1966 and 1975. The second half of the gallery displays the more contemporary images, all taken in the last decade: Mann’s recent photographs of her husband, cave images from Whetstone’s recent series Post Pleistocene, and landscape pictures from Pamela Pecchio’s series On Longing, Distance, and Heavy Metal.

Anyone familiar with Gowin’s images brings to this exhibit the knowledge that he has photographed his wife Edith from the 1960s into the present. Family is his Hale County. His practice of revisiting and return is not directly on display here, however. Instead, the exhibit includes beautiful examples of his early photographs in which his use of a tripod and large format camera renders snapshot subject matter in brilliantly framed black and white images full of crisp lines and sharp contrasts. In “Edith, Ruth, and Mary, Danville, Virginia,” his wife and her sisters pose for the camera as just to the right of the central triptych a little boy hoes a patch of bare dirt in the background. In the middle, Ruth looks down as her arms entwine with her sisters’ on either side. Just below her sister’s hand, Edith’s hand grasps the skirt of the nightgown she is wearing and pulls it tight to reveal the beginning bump of her pregnancy. The three sisters’ faces and Edith’s nightgown evoke the girls these sisters have been even as Ruth’s hair rollers, Mary’s dress, and Edith’s swelling belly suggest the women they are becoming. Gowin's works, in his own words, return to “the moods that find solemnity in daily life.”

While the museum owns some of Mann’s landscape photographs, Mann has loaned Wylie a set of images from her most recent series Proud Flesh. Her subject here is wounds, both the marks age and illness make on her husband Larry’s body and the flaws in the contact prints made from wet-plate collodion negatives, a nineteenth-century processing method. This doubled subject matter highlights the multiple ways photography cuts through the flow of time. Mistakes in the developing process as well as time and illness mar the images of Larry’s naked flesh. As Mann’s famous photographs of her children make clear, she has known and loved this human body intimately, and the aesthetic evokes the frank and yet tender perspective of a long-term lover. They also quote an entire lost genre of late-nineteenth century photography in which Civil War veterans display their scars to advance the cause of medical education. In “Semaphore,” an image of her husband’s lower arm, a flaw in the processing near his elbow suggests a hole made by a bullet. In “Kingfisher’s Wing,” a stunning image of Larry’s legs, butt, and back, marks on his skin (which may originate on his flesh or on the negative) erupt into wounds that seem to pierce the very photograph itself.

Jeff Whetstone’s stunning photographs of graffiti-covered saltpeter caves manage to conjure both the too-perfect beauty of contemporary nature photographs and the urban grit of images of tagged subways and warehouses. Return is on display here too, the repeating processes of geological time that leave waves in the rock and hollow out the caves and the layered scratches and writings left behind by people marking their presence, from slaves mining saltpeter and 1930s smoky signatures to neon sprayed names. In “Johnny,” perfect red cursive letters spell out the name in the center of the photograph, spotlighted below a giant caramel ribbon of rock that flows down the center of image from outside the frame. Below “Johnny,” which sits on the wall like a crown, names and dates cover earlier names and dates and markings and the rock walls across the entire bottom half of the photograph.

The theme of return is subtler in Pamela Pecchio’s dense and layered photographs, present more by implication in the multiple springs and summers required for vegetation to grow this tangled and thick. Pecchio’s images present landscapes as mazes to hack through rather than places of refuge or escape. Their layered impenetrability, along with the title of the show in which some of these images also hang in New York City, pushes a metaphoric reading of these sometimes snowbound and other times fecund places as stand-ins for the human psyche. Anyone who has ever seen a southern spring will recognize the knotted and budding forsythia, rendered almost violent here in an absolutely brilliant print titled “Rainbow in the Dark.” The passage of time means another year’s growth, another layer of knotted branches and complications. A wisp of understanding may be possible here, but not clarity, not order.

The UVA Art Museum sells this show short by suggesting that these works share some mythical “Southern” quality, a “distinct sense of place.” What these photographers share, with the exception of Adams whose images move too close to caricature to be humane, is an almost staggering talent for making deeply meaningful images. Mann, Christenberry, and Gowin are already well known and widely celebrated photographers. Whetstone and Pecchio deserve to be.

Gefter, Philip. "Southern Exposures: Past and Present Through the Lens of William Christenberry." The New York Times, July 2, 2006. http://www.nytimes.com/2006/07/02/arts/design/02geft.html.

"Imagining a Shattering Earth: Contemporary Photography and the Environmental Debate" with photos by Emmet Gowin
http://www2.oakland.edu/shatteringearth/artists.cfm?Art=33. 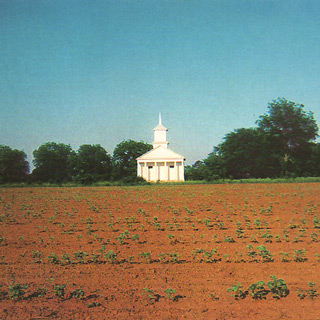