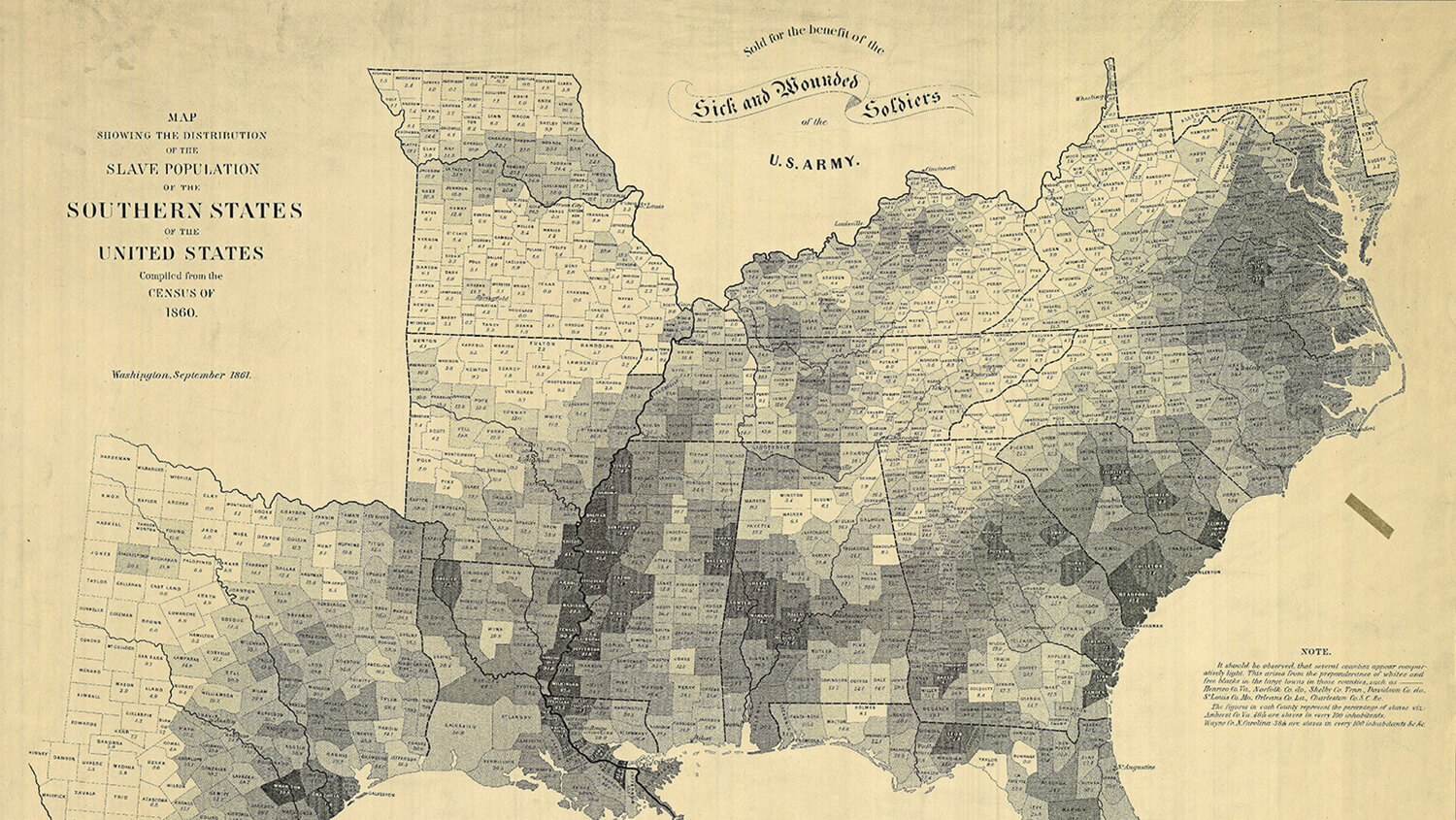 Stories that use the South by purporting to map it are no new thing, as two nineteenth-century passages responding to the question of southern secession will illustrate:

It is true that science has achieved, over space and time, triumphs almost miraculous, but it has not annihilated them. . . . It is almost impossible to conquer nature. . . . In examining, then, the conflicting characters of two great sections, it is no unfavorable introduction to such an investigation, to discover that nature herself has drawn deeply the sectional lines.1William Henry Trescot, "The Position and Course of the South" (Charleston: Steam Power-Press of Walker and James, 1850), 8. Trescot's geographical logic struck a reviewer for DeBow's as absurd. "Would not any one smile," he wrote, "to think of the Ohio River and the Potomac being such grand national barriers as must . . . constitute of necessity the nations on either side of them, diverse, independent, hostile to each other and capable of being at best but 'unequally yoked together,' and yet Mr. Trescott [sic] with great profoundness, announces this discovery." See "The Position and Course of the South," DeBow's Review of the Southern and Western States 2.2 (February 1851): 231.

In reality, if North and South formed two autonomous countries, like, for example, England and Hanover, their separation would be no more difficult than was the separation of England and Hanover. "The South," however, is neither a territory closely sealed off from the North geographically, nor a moral unity. It is not a country at all, but a battle slogan.2Karl Marx, "The Civil War in the United States," Die Presse 306, (November 7, 1861).

The first passage, from William Henry Trescot's 1850 "The Position and Course of the South" (literally) naturalizes sectional differences in order to justify splitting the nations that have—organically, as it were—developed from them. Terrain precedes and predicts territoriality; as it would be later for Scarlett O'Hara, it's all about the land. But just as Scarlett's "land" constitutes an elaborate fiction, so Trescot's determines a particular—and particularly artificial—story about the South. "Not only has nature drawn these lines," he writes, "but history, in the action of its providential instinct, has followed their guidance."3Trescot, "Position and Course," 9. Once its position is established, the South's secession becomes a matter of course; intersectional rupture is necessary if sectional identity is to survive. But cause and effect are easily reversed when we recognize that Trescot's course necessitates that he position the South—his South, at any rate—as naturally separate from its northern counterpart.

The second passage, from Karl Marx's 1861 article, "The Civil War in the United States," tells a different story altogether. Here, the absence of geographical "separation" points up the illegitimacy of southern secession. (Frederick Law Olmsted employs an identical logic in The Cotton Kingdom of the same year, claiming that "an arbitrary political line may divide the north part from the south part, but there is no such line in nature: there can be none, socially.")4Frederick Law Olmsted, The Cotton Kingdom: A Traveller’s Observations on Cotton and Slavery in the American Slaves States (1861; New York: Modern Library, 1984), 3. Decoding Trescot's South as (mere) battle slogan, Marx silently generates a battle slogan of his own: his map of the South, too, terminates in a project of warfare, this one to suppress the South's revolutionary intentions. Today, the positions staked out by Trescot and Marx seem uncannily familiar. As Trescot says, nature still resists time-space compression, although it continues to be compressed at an accelerating rate; as Marx suggests, the South still operates as a battle slogan, often in projects of decompressing space and time against modernity's late encroachments.

As deterritorialization proceeds apace, efforts to reterritorialize—to reproduce place and locality—are increasingly mobilized under the aegis of tradition, heritage, culture, and identity. Put another way, we are still reproducing and naturalizing the South as place in an age defined, according to one story (Jameson's postmodern one), by "nature" being "gone for good." (But it is almost impossible to conquer nature.)

Mapping the South is always a situated venture and always implicitly narrative: a way of mobilizing space in efforts of immense variety and scope, ranging from (at the macro level) the red state mythology of contemporary politics to more localized efforts to generate more intimate and compelling microSouths. To suggest that the South isn't going anywhere is not to say that it is impervious to motion. On the contrary, my premise is that the late South is mobilized in an increasingly diverse range of cultural projects.

The Real South is a study of the fake South, which I argue becomes the real South through the intervention of narrative. That the South is increasingly sustained as a virtual, commodified, built, themed, invented, or otherwise artificial territoriality—that is, as it becomes less imaginable as a "natural" or "organic" culture, if that antinomic construction ever existed—has hardly removed it from the domain of everyday use.

Scott Romine, an associate professor of English at the University of North Carolina at Greensboro, is also the author of The Narrative Forms of Southern Community.

This excerpt from Scott Romine's The Real South: Southern Narrative in the Age of Cultural Reproduction (Baton Rouge: Louisiana State University Press, 2008) is reprinted by permission of the author. For ordering information visit the LSU Press page for The Real South.