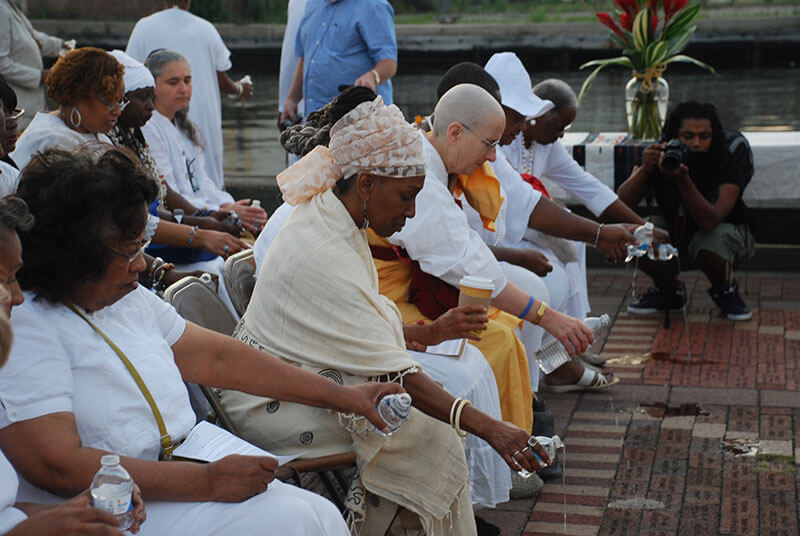 There is no place where I can go, or where you can go, and think about, or summon the presence of, or recollect the absences of the ones that made the journey. There is no small bench by the road, there is not even a tree scored and initialized that I can visit, or you can visit, in Charleston, or Savannah, or New York, or Providence, or the Ohio River, or better still, on the banks of the Mississippi.

—Toni Morrison1Toni Morrison, "A Bench by the Road," World Journal of the Unitarian Universalist Association 3 (January/February 1989): 4.

The Middle Passage Ceremonies and Port Markers Project (MPCPMP) was established in 2011 to honor and commemorate the two million captive Africans who died during the Middle Passage from Africa to the Americas.  Some half-million enslaved arrived at forty-one documented sites in the United States. At these arrival ports a significant portion of American history began. Relying principally upon information from Voyages: The Transatlantic Slave Trade Database, developed by professors David Eltis of Emory University and P. David Richardson of the University of Hull. The remembrance ceremonies at these ports present the history of the transatlantic human trade and provide a means for addressing a painful and shameful American experience whose vestiges persist today. These ceremonies feature rituals incorporating representatives of African, Native American, Asian, and European religious traditions with current and historical ties to the site as well as a detailed recounting of the history of enslavement in the specific locale.

The installation of historic markers at the forty-one Middle Passage arrival ports publicly designates these places as crucial points where the lives of European and African people intersected to form what would become the United States. In some cases, this has required a reassessment of the popular narrative and perceptions. For instance, Jamestown, Virginia, which is routinely identified in schoolbooks as the place where Africans first arrived in North America, is neither the actual place of Africans' first arrival in Virginia (Point Comfort, Hampton, Virginia, is the actual site) or in North America (Florida holds that distinction). Residents of Fredericksburg, Virginia, long identified with the domestic human trade, recently learned, after MPCPMP presented Eltis's research from the Voyages Database, that their city was a Middle Passage port on the Rappahannock River.2Further study by a National Park Service historian reviewing data from the New York Historical Society provided more detail to support this "new" site definition.

With a proposed marker to be unveiled February 7, 2015, St. Augustine, Florida, previously known as a Spanish colony, will henceforth be identified as the oldest permanent (1565) European/African/Native American settlement on US territory. The inclusion of the forty–sixty free and enslaved Africans who arrived on Spanish ships at the first landing on August 28, 1565, significantly alters the narrative as the city embarks on commemorating its 450th anniversary. Boston is scheduled to hold a Middle Passage remembrance ceremony and to place a marker on August 23, 2015. The historical marker text will inform the general public about the Bay Colony's role as the first place where slavery was legal in the North American British colonies. This further reconfigures the popular perception that slavery was a phenomenon only of the US South. When a marker is installed in the Sapelo Bay area in Georgia, it will increase awareness that in 1526 the first European/African settlement, San Miguel de Gualdape, was established in this area. That marker will also record that Sapelo Bay is the site of the first rebellion by enslaved Africans and the first maroon community on the North American mainland.

Each MPCPMP ceremony and marker is unique. In our initial presentation to local participants in the commemoration project, we suggest elements to include in the remembrance ceremony and discuss the historical information on each marker, but otherwise act only as a facilitator and advisor. Each locale makes the decisions on the ceremony, program, marker design, and text. To date, nine sites have sponsored ceremonies in conjunction with the project since 2012:

Over the last twenty years local groups in several US cities have conducted African ancestral remembrance ceremonies marking Middle Passage sites.3These cities include New York, New York, New Orleans, Louisiana, Hampton, Virginia, Oakland, California, Miami, Florida, Key West, Florida, and Galveston, Texas. Some have affiliated into a loosely knit network independent of MPCPMP. As the only national organization working to commemorate Middle Passage sites, MPCPMP complements this work by ensuring that this history is systematically acknowledged and documented. As a member of the MPCPMP honorary board and creator of the database of the transatlantic slave trade, Eltis has been instrumental to this effort. Through information on the years, ships, numbers of captive Africans delivered, and embarkation and disembarkation locations obtained from Voyages, the project is able to present an appeal for ceremonies and markers at each arrival site based upon scholarly research. In a very real way, this is the direct and immediate application of scholarship to public history. MPCPMP works with local contacts to make a place where everyone "can go, to think about, or . . . summon the presence of, or recollect the absences of . . . the ones that made the journey."4Toni Morrison, "A Bench by the Road."

For further information on MPCPMP visit middlepassageproject.org or the project's Facebook page.

Ann Chinn is the Executive Director of the Middle Passage Ceremonies and Port Markers Project (MPCPMP).

This is an open access work distributed under the terms of the Creative Commons Attribution No Derivatives 4.0 License.