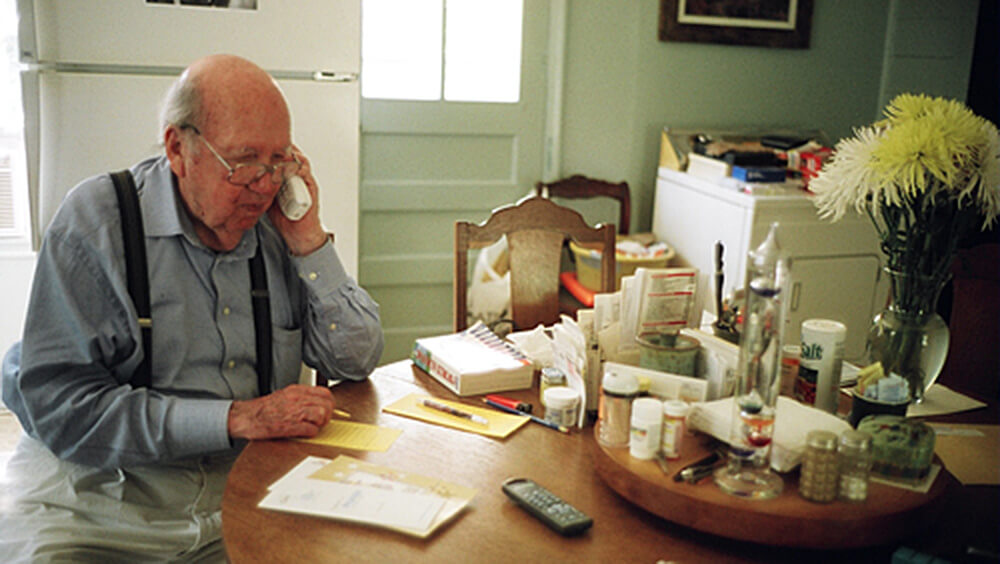 The Reverend Will D. Campbell, a "renegade" Baptist preacher whose unorthodox ministry to a far-flung parish of unchurched souls was the signifying hallmark of his long pilgrimage out of the depression-wracked Deep South, died Monday, June 3, 2013, in Nashville from complications following a stroke. He was eighty-eight.

His career-long commitment to the biblically-remembered "least of these" earned for Campbell the praise of a broad range of individuals, from former President Jimmy Carter and country music icon Tom T. Hall to neighbors on his country road in middle Tennessee and inmates at the Riverbend Prison near Nashville.

"Brother Will, as he was called by so many of us who knew him, made his own indelible mark as a minister and social activist in service to marginalized people of every race, creed, and calling," Carter said. "He used the force of his words and the witness of his deeds to convey a healing message of reconciliation to any and all who heard him."

Hall, who on occasion turned his tour bus to the service of a motley brotherhood of Campbellites on good-deed missions in the southern outback, remembered those occasions and other forays with Campbell as "some of my best days on the road."

"Will was many things to us," he recalled. "Preacher, prophet, picker, poet. He had an uncanny way of making whoever gathered around him feel like they were part of the mix, no matter how much we differed among ourselves."

Throughout the last half of the twentieth century, Campbell often made common cause with activist leaders of religious and social efforts to fulfill the nation's unmet promises of liberty, equality, and justice for all. Finding his voice as a plain-spoken advocate of racial integration in the mid-1950s, he soon allied himself with the Nashville-based nonviolence initiative of the Reverends James M. Lawson and Kelly Miller Smith, whose leadership inspired the lunch-counter sit-ins and commercial-bus freedom rides of 1960–1961.

In later years, Campbell spoke eloquently against the Vietnam War, capital punishment, unregulated guns, overbearing government power, abortion on demand, and the invasion of Iraq. He also joined the fight to secure equal rights for women, gays and lesbians, the poor, the homeless, and all who suffered discrimination in a society dominated by affluent white males.

Describing himself as "a Baptist preacher of the South, not a Southern Baptist preacher," Campbell chose to identify more closely with the radical Anabaptist tradition of colonial times than with the contemporary Southern Baptist Convention, which he frequently criticized as too self-serving. He seemed to revel in the adjectives that some of his more rebellious "parishioners" attached to his Baptist identity: "renegade," "guerrilla," "outlaw," and one he used himself in a book title: "bootleg."

In appearance, thought, and behavior, Campbell was an unconventional and sometimes eccentric figure. He commonly wore cowboy boots, Western-style pearl-button shirts, and outlandish hats (in part to cover his premature baldness), and sported a walking cane long before he needed one for support. He once crawled through an airport security checkpoint on his hands and knees after the attendant insisted on x-raying his cane.

Campbell's favorite headpiece was the traditional broad-brimmed black wool hat of the Amish religious sect, which some of his friends thought lent him the aura of an anti-hero. The late cartoonist Doug Marlette appropriated the image for a comic-strip character called "the Rev. Will B. Done," but the humor eventually wore thin, as did the friendship that had developed between the two men. Both Campbell and Marlette denied any connection between the real and imaginary characters under the black hat.

In his writing and in public discourse, Campbell could be humorous and profound, inspiring and apocalyptic—sometimes in the same paragraph. He was not shy about mixing the profane with the sacred. He enjoyed moonshine-making, bourbon-sipping, tobacco-chewing, and ritual as public performance. As a three-note guitar-picker and singer of his own off-beat compositions, he was adept at making his sermons and speeches clever or funny without losing their social message or their theological roots.

"At seminary, they called it hermeneutics and exegesis," he explained. "I never took it all that seriously. I always thought it was better to reach out to people with humor than with erudition—or fear, which seems to be the weapon of choice of the electronic soul molesters, otherwise known as TV preachers."

Will Davis Campbell was born on July 18, 1924, on an eighty-acre cotton farm near the village of Liberty, in south Mississippi. He and his two brothers and one sister attended the public schools of Amite County, when they were not working in the field and garden with their parents, Lee and Hancie Campbell, during the lean years of the Great Depression.

When he was seventeen, Campbell was ordained to be a Baptist preacher. After high school, he briefly attended Louisiana College in Pineville before joining the US Army in 1942; while still in his teens, he served as a combat medic in the South Pacific. After the war he married Brenda Fisher, whom he had met at college. They moved to North Carolina, where Campbell earned a bachelor's degree in English at Wake Forest College (now University). He attended graduate school at Tulane University in New Orleans for a year, and then entered the Yale University Divinity School, from which he received a doctorate in 1952.

The Campbells returned to the Deep South, where he served until the fall of 1954 as pastor of a church in Taylor, Louisiana. That time coincided with the run-up to what was to become the modern civil rights movement, heralded by the US Supreme Court's Brown decision overturning school segregation laws. With his own views becoming more focused in opposition to racial discrimination, Campbell took a new position as director of religious life at the University of Mississippi. His tenure there was brief, ending in 1956 when he was eased out for consorting with a local black minister and inviting a noted white integrationist to speak at the annual Religious Emphasis Week on campus.

Moving his family to Nashville, Campbell opened a southern office for the Racial and Cultural Relations Department of the New York-based National Council of Churches. For the next seven years, he was closely allied with most of the principal figures in the South-wide drive for racial justice, including the Reverend Martin Luther King, Jr. and many activist college students, among them Dianne Nash, Bernard Lafayette, and John Lewis (now a congressman from Atlanta). In 1957, Campbell was present at the desegregation of Central High School in Little Rock and at the first meeting of the Southern Christian Leadership Conference in Atlanta. He was also at the Lorraine Motel in Memphis on the evening in April 1968 after Rev. King was assassinated there.

Beginning in 1963 and continuing for almost four decades, Campbell was the director of a privately-funded network of religious activists called the Committee of Southern Churchmen, which had its origin in the Christian social gospel movement of the 1930s. Among its ventures was a quarterly magazine, Katallagete (Greek for "be reconciled"), which published scholarly and popular articles of social criticism and radical theology.

With his wife and three children, Campbell had settled by 1965 on a small farm near Mt. Juliet, northeast of Nashville, and from that base he built a national reputation as a writer and speaker and the personal shepherd to a scattered and eclectic flock of unconventional Christians whose common thread was an inchoate wariness about the institutional church.

The vast majority of his "congregation" were not famous or notorious figures but ordinary people with a profound sense of separation from mainstream Christianity. Over the years, Campbell presided at their ceremonies of union, reunion, and disunion—their marriages and other vow-takings, their baptisms and christenings, their graduations and ordinations, and even, some claimed, their divorces. In hospitals and prisons, at funeral homes and gravesites, he helped to shoulder their burdens of disconnection and loss, and in the end to share their grief. At a 1973 "funeral service" for an entire town—Golden Pond, Kentucky—he offered words and songs of consolation to more than a hundred former residents who had been evicted by the Tennessee Valley Authority to make way for a park.

Still, it was his ties to high-profile individuals long since divested of formal religious affiliation that brought notoriety to Campbell.

Not all of his admirers were disconnected from the church. James McBride Dabbs, a South Carolina scholar-writer and a high-ranking Presbyterian, once described Campbell as "a man of many disguises" whose theology could be summed up in his assertion that "all men are bastards, but God loves them anyway."

The famed Trappist monk Thomas Merton, who occasionally excused himself from his contemplative life in a Kentucky monastery to slip into the back room of a restaurant in nearby Bardstown for a beer and a steak with Campbell, characterized him as "a deeply and thoroughly committed Christian" and added, "I admire him for his humor, his humanity and his faith."

Beneath his diverting guises, Campbell was a bookish man with a deep well of intellectual curiosity, a preacher-poet's facile turn of phrase, and an actor's expansive but controlled ego. His books, close to twenty in all, are a true reflection of his eclectic interests. Among them are Brother to a Dragonfly, a penetrating personal account of his brother Joe Campbell's struggle with drug addiction; Up to Our Steeples in Politics and Race and the Renewal of the Church, both critiques of modern Christianity in the 1970s; Forty Acres and a Goat, a memoir; Providence, a history of one square mile of land in Holmes County, Mississippi; The Glad River and Cecilia's Sin, two spiritually nuanced novels; The Convention, a satirical parable about the Southern Baptist Convention; biographies of two Mississippians, Episcopal Bishop Duncan Gray, Jr. and Robert Clark, a black political leader; and three books for children.

At various times, Campbell's books were honored with awards named for Lillian Smith, Richard Wright, and Alex Haley—themselves noted writers from and of the South—and in 2000 he was one of six recipients of the Presidential Medal in the Humanities, presented at the White House by President Bill Clinton. Also in that year, the actor Ossie Davis narrated God's Will, a documentary film based on Campbell's life. It was produced at the University of Alabama and broadcast on PBS.

John Egerton was born in Atlanta, Georgia. He earned a B.A. at the University of Kentucky in 1958 and an M.A. in 1960. He has written for the Southern Education Report, Race Relations Reporter, and Atlanta's Southern Regional Council and worked as a contributing editor for Saturday Review of Education, Race Relations Reporter, and Southern Voices. Egerton has written or edited eleven non-fiction books and contributed over two-hundred articles to periodicals. He has also been a participant in and writer for many projects or conferences dealing with desegregation and civil rights.

Campbell, Will D. Race and the Renewal of the Church. Philadelphia: Westminster Press, 1962. http://archive.org/details/racerenewalofchu00camp.

Campbell, Will D. with James Y. Holloway. Reprint. Up To Our Steeples in Politics. Eugene, OR: Wipf and Stock, 2004. First published 1970 by Paulist Press.

Campbell, Will D. and James Y. Holloway, eds. Reprint. The Failure and the Hope: Essays of Southern Churchmen. Eugene, OR: Wipf and Stock, 2004. First published 1972 by Eerdmans.

Finding Aid for the Will Campbell Collection, University of Mississippi Libraries, Archives and Special Collections
http://www.olemiss.edu/depts/general_library/archives/finding_aids/MUM00062.html

Letcher, Michael. God's Will. Video. Narrated by Ossie Davis. Produced by The Center for Public Television at The University of Alabama. Vimeo video, 60 min. http://vimeo.com/55126898.