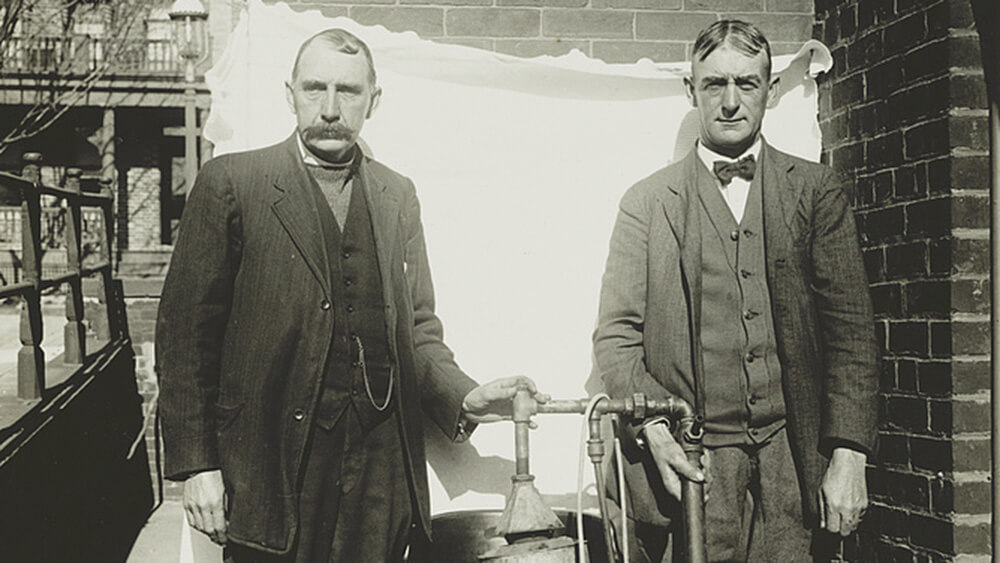 Charles Thompson's Spirits of Just Men: Mountaineers, Liquor Bosses, and Lawmen in the Moonshine Capital of the World tells the story of Franklin County, Virginia, during the 1930s through the lives of Appalachian farmers who made moonshine there. The book reveals how whiskey production ultimately caught local residents in a conspiracy of national proportions. As background, Spirits of Just Men asks why so many farmers lived in such out of the way places. How did they acquire their knowledge of producing liquor? And, what did moonshining have to do with national farm and trade policy? Southern Spaces offers two excerpts from Spirits of Just Men. The first, a video produced by Marissa Katarina Bergmann, offers glimpses of modern-day Shooting Creek juxtaposed with historical images, remembrances of Thompson’s grandfather, and the music of Charlie Poole. The second excerpt sketches the origins of whiskey-making in the backcountry and recalls the resistance to Alexander Hamilton’s efforts to impose a whiskey tax.

Making Whiskey in the Backcountry

Whiskey making, while rare in southern England, was highly developed in both Scotland and Ireland by the time of the Ulster emigration. We can credit the Ulster immigrants for helping introduce the tradition to America. Through their influence, whiskey making became commonplace everywhere in the new colony, particularly on the frontier. Frenchman Marquis de Chastelleaux observed that it was the only drink served in the American backcountry.1David Hackett-Fischer, Albion’s Seed: Four British Folkways in America (New York: Oxford University Press, 1989), 729. In the Pennsylvania backwoods of the 1700s, everyone made and drank whiskey, no matter their standing in the community.

The newcomers built both farm-based distilleries and larger-scale commercial operations in the cities, and they had a ready market for their products. From the Philadelphia elite on down to the redemptioners who worked for them, nearly all the easterners downed alcohol with meals, though those who could afford it also purchased imported rum and wine. Men, women, and often even children drank whiskey at various time of day, and the beverage enlivened nearly every kind of gathering, from church meetings and elections to dances and prize fights.2William Hogeland, The Whiskey Rebellion: George Washington, Alexander Hamilton and the Frontier Rebels Who Challenged America’s Newfound Sovereignty (New York: Scribner, 2006), 66. With this kind of consumption pattern among the English, they had little room to ridicule people of the western mountains as habitual drunks. But they did so, even though their words rang with hypocrisy.

In fact, it was whiskey’s popularity among the English that gave the back-border farmers impetus to produce more than they could consume and haul it back East to sell. Whiskey became the first frontier cash crop and the main source of income when the supplies of animal furs dwindled as woods gave way to farm fields. Whiskey made small loads on a single packhorse profitable, whereas grain alone or most any other farm product could barely pay for the trip. On the western Pennsylvania and Virginia frontiers, whiskey sold for twenty-five cents a gallon. In the more populous areas, a gallon of rye could bring as much as a dollar. No entrepreneur would bother to transport sacks of grain by horse and wagon across mountains when it could be reduced in volume through distillation and bring in more money in the process.3Ibid., 67.

As people moved into the backcountry, it was common to see settlers with copper worms and small still pots slung under their Conestoga wagons or on their packhorses. Some took with them only the knowledge of how to build a rig. Coppersmiths soon set up shop in the mountains and built and sold stills to their neighbors to supplement their farm earnings. Those who had made poteen in Ireland needed only equipment and grain to get started. Those who had no prior knowledge worked with neighbors and learned by doing.4Joseph Earl Dabney, Mountain Spirits, Vol. 1 (Asheville, NC: Bright Mountain Books, 1974), 51. Soon nearly every community had stills and nearly all the farm families had some way of making or procuring whiskey. Eventually distillation spread to other areas of the colonies.

On plantations throughout the colonies, a still house was a common outbuilding in which barrels of whiskey were distilled and aged. By independence, small distilleries were everywhere. Even three of the first five US presidents—George Washington, James Madison, and James Monroe—owned distilleries. Jefferson, who favored wine and beer, was the only one to frown on hard liquor. Adams had no distillery on his farm, but he wrote that he drank hard cider made on his place nearly every day of his life. For presidents and nearly all their fellow citizens, distilled whiskey became the indispensable and ubiquitous American drink. Even with other regions joining in the business of distilling, frontier whiskey continued to hold a good reputation in cities back East for both its taste and its price. Good water was another reason, as were the local ingredients they used to make it. The farther south the farmstead, the more likely it would have shifted from producing oats, barley, sheep, and cattle, common in the British Isles, to wheat, pigs, and corn.5H. Tyler Blethen and Curtis W. Wood, Jr., From Ulster to Carolina: The Migration of the Scotch-Irish to Southwestern North Carolina (Raleigh: North Carolina Department of Cultural Resources, Division of Archives and History, 1998), 33. Corn became far and away the primary grain of the Appalachians as well as the main ingredient for the liquor produced there. The corn varieties—called Indian corn by most—developed by the first peoples were perfect for the climate and rich in taste and carbohydrates, which made for higher alcohol content per bushel and a sweeter product. As settlements shifted from hunting and trapping to sedentary farming, all the ingredients for stilling this new crop were present in one place. Making liquor where the corn was raised added freshness to the flavor as well.

On the frontier as well as back in the settlements, few had any moral problems with whiskey consumption. In fact, hospitality and courtesy of the day required offering liquor. Failing to serve it would have created a serious breach of etiquette. Custom was to furnish whiskey in liberal quantities at all community gatherings, particularly workings such as house-raisings and corn-shuckings, as well as to laborers at harvest time, haying, and fruit gathering. Whiskey also was one of the few medicines available. People used it for rheumatism, malaria, snakebite, and a variety of communicable diseases from colds to gonorrhea.6Wayland F. Dunaway, The Scotch-Irish of Colonial Pennsylvania (Baltimore: Genealogical Publishing, 1979), 197; see also G. D. Albert, History of Westmoreland County, Pennsylvania (Philadelphia: L. H. Everts, 1882), 171, cited in Dunaway, 197. Whiskey was good for helping work, sickness, pain, as well as for making festivities more joyous. Many a song paid tribute to its transformative power. To most it was considered a God-given right.

In 1794, when Alexander Hamilton and other leaders proposed raising internal revenue for the struggling American government by taxing whiskey, the plan met with open revolt. Farmers who had fought against the British, specifically against taxation without representation, wanted nothing to do with the tax. The Whiskey Rebellion of 1794 ensued. The uprising was best organized in Monongahela County in southwestern Pennsylvania, where Protestants from northern Ireland had settled. The protesters made counterresolutions, staged tax protests, and intimidated, even beat, revenue collectors. Tarring and feathering the revenuers was common. When the rebellion spread into northwestern Virginia and the rest of the mountain region, it became what historian John Alexander Williams called “one of the few expressions of ‘perfect unanimity’ in the mountain region’s entire political history.”7John Alexander Williams, Appalachia: A History (Chapel Hill: University of North Carolina Press, 2002), 118-19. Though President Washington sent troops to Pennsylvania and quelled the uprising before it managed to get out of hand, the insurrection caused the government to drastically redraw its tax policy. While a whiskey tax remained on the books until the 1840s, the feds stopped collecting it for decades to come. Congress could find no one desperate enough to take the job.8Ibid.

Resistance to the whiskey tax politicized and united many local communities in ways that no other issue had before. Even as Secretary of the Treasury Alexander Hamilton was oblivious to whiskey’s centrality, the whiskey rebels showed Americans that citizens had to be involved in their own governance. Whiskey had linked farmers politically, and through protests they made it clear that whiskey was their only source of cash and their way out of debt. Taxing that main means of escape from dire poverty made people fight as if their lives depended on it. Indeed, they proved Hamilton’s assertion to Congress that a whiskey tax was a luxury tax had been simply wrong. Instead, the whiskey tax had pushed people with no money too far.9Hogeland, 67. Had the whiskey rebels got something back from their taxes, say access via road to greater markets or maybe economic help, they may have seen the benefit of paying them and behaved differently when the collectors came calling. But no government services were forthcoming on the frontier. As Sherwood Anderson pointed out in Kit Brandon, these whiskey rebels had to wonder, “What was all this business about taxes? What had government done for us that we should pay taxes?”10Sherwood Anderson, Kit Brandon: A Portrait (New York: Charles Scribner’s Sons, 1936), 118.

A native son of Franklin County, Virginia, author and filmmaker Charles D. Thompson, Jr. is the curriculum and education director at the Center for Documentary Studies and a lecturer in cultural anthropology at Duke University.

The Distilled Spirits Council of the United States. The American Whiskey Trail.
http://www.discus.org/trail/.