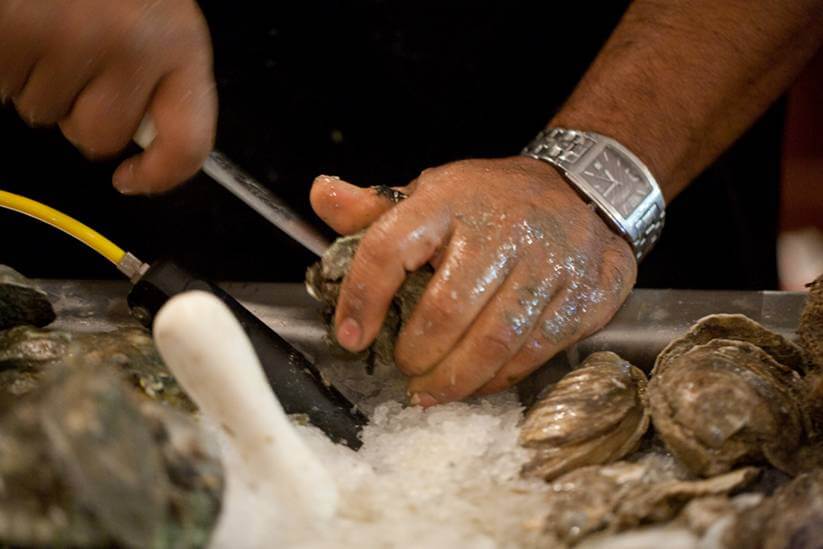 "An Oyster by Any Other Name" is part of the 2011 Southern Spaces series "Sightings: Architecture, Art, and Artifact," a collection of reviews and essays examining visual representations of the US South in museums, landscapes, and media. Series editors: Lisa Goff and Grace Hale.

On a late February Saturday night in Galveston, Texas, I stood shoulder to shoulder with a hundred fellow conspirators, tasting two thousand oysters from all along the Gulf Coast. It was the first symposium hosted by Foodways Texas, an organization dedicated to preserving, promoting, and celebrating the state’s diverse food cultures. We took over a room at Gaido’s, a century-old restaurant that has served its share of succulent oysters. As revelers drank and cheered, Mardi Gras parade floats, barely visible through the early spring fog, advanced noisily down the seawall. Our targets—a consideration of oyster appellations and a revaluing of fish previously dismissed as trash—intermittently floated up through the thick fog of history, ocean, and industrial/scientific rhetoric, raising as many questions as answers. Sweet, fat, briny, buttery, and luscious, the oysters were a phenomenon of excess and local flavor, a bacchanalia fitting the surrounding party.

Mad Island, Elm Grove, Todd’s Dump, Possum Pass, Bayou Cook, Pepper Grove, and Ladies Pass. The sheer number of oysters in one place was notable, however the history came from the laminated nametags accompanying each sampling of oysters. Rather than numeric codes in fine print designating the bed from which oysters were harvested, rather than a tag lumping all together as from the Gulf, for one night the oysters stopped being generic. The Texas oyster beds got their names back. We compared the taste of Mad Island versus Pepper Grove. We debated the salinity of Possum Pass versus Bayou Cook. We found the provenance, and we located and glimpsed the history in the names. Who was Todd and what did he dump? What Ladies gave their legacy to Ladies Pass? Where are the elms that inspired Elm Grove?

Ribbonfish, Almaco Jack, Big Eyes, Rainbow Runners, and Drills. Oysters were not the only food to regain their names at the Foodways Texas Gulf Coast gathering. A panel took on monocultural fishing practices driven by market forces, practices that value one product and dismiss everything else that comes up in the nets or on the line as “trash.” If Redfish are selling, then Ribbonfish get trashed, along with Rainbow Runners. But if we rename the trash as by-catch, and find someone like P. J. Stoops, a walking encyclopedia of the names and qualities of Gulf species, then we might compare the Almaco Jack with the Big Eyes and not throw either away. By restoring the names and the balance, we also might find similarities between predators such as oyster drills and delicacies such as escargot, and discover that devotees of snails in butter and delicate herbs also may like oyster drills—kissing cousins to the land snails—prepared the same way. Such practices could help protect the oyster beds from at least one threat.

Anahuac, Lonesome, Desperation, Moses Gate, Resignation, Mary’s, Slim Jim, Frenchy’s. For this North Carolina native, Texas provides a fascinating geographic shift from which to examine questions of cultures, landscapes, and artifacts. On this particular evening, though, it was my perspective as a humanities scholar that was most engaged. We could locate oysters and restore nineteenth-century reef names because food historians such as Robb Walsh found maps and newspaper stories from before the beds were scientifically coded and classified by number. We heard the poetry in old names used by local fishermen and women perhaps because Stoops’ background includes an English degree, making him inclined to favor the vernacular over the Latin in by-catch names. The long history of erasure of the local by nationalizing or industrializing scientific rhetoric took a small step back. Even if we do not know how Lonesome, Desperate, or Resigned some early oystermen and women were, we glimpsed stories of families and lives memorialized by names. From the restoration of narratives came a challenge to homogeneity and a celebration of heterogeneity of cultures, people, and places. Could it be that Tejano and Mexican fishing practices joined Cajun, Anglo, and African American ones at the Anahuac (or center) with Frenchy, Jim, and Mary coming along? We might feel an investment in terroir—what food scholar Amy Trubek calls the "taste of place" and the connections of flavors, foods, and cultures—if later we hear that Moses and his Gate are threatened, more than we might if unnamed and generalized reefs are said to have declined.

Confederate, Dollar, Gaspipe, Dryhole, Snake Island, Redfish. Names and narratives can be fraught and dangerous. We can use them to romanticize an untroubled past, one without Gas pipes draining into the bay waters and without traces of civil war and its racial divides carved into the coast. We can use nostalgia to forget our responsibilities in the present. Dollars seem quaint rather than profoundly influential on a working bay. Oyster and fish names can stand in place of the names of the many men, women, and children who historically worked in the canneries and factories, on the boats, and in the crews—often for little pay, in brutal conditions. Efforts to restore histories and cultures can fetishize products, price them out of their blue-collar roots, and harvest them out of a healthy balance in the ecosystem.

Lonetree, Little Bird, Eagle Point, Buckshot. Amid contemporary habits of quantifying and generalizing, perhaps the fondness for storytelling demonstrated on that February weekend in Galveston addresses a gap. If food and drink can be thoughtfully combined with narratives and bonding across experiences, then names may make a difference. If we root ourselves and our foods in places, connect people and time, and reflect on cultural exchanges, we might build new commitments and political alliances.

Did the oyster appellation experiment cut through the night’s soupy fog? Does the by-catch renaming transform our relationship with the seas? Do I now know a truth about oysters, an essential worth of fish not discarded? I am not sure. I do know that since the gathering a few Texas restaurants have begun hosting tastings organized by appellation. A by-catch booth at a Houston farmers’ market twitters lists of species and possibilities—and followers flock in. Perhaps restoring narratives to products previously obscure, unfailingly fresh, and newly valued will strengthen the connections between stories, oysters, fish, and cultures, and even create space for stories untold. That might be worth a celebratory parade.

Elizabeth Engelhardt, associate professor of American Studies and Women’s and Gender Studies at the University of Texas, Austin, writes about food, gender, race, and class in the US South. She is lead author of Republic of Barbecue: Stories Beyond the Brisket (2009) and author of the forthcoming A Mess of Greens: Southern Gender and Southern Food (Fall 2011). Engelhardt is also co-editing (with John T. Edge and Ted Ownby) a forthcoming volume about southern food methodologies. Originally from western North Carolina, she has followed in the footsteps of generations who traveled from the mountains of Appalachia to live in and write about Texas.

Trubek, Amy B. The Taste of Place: A Cultural Journey into Terroir. Berkeley: University of California Press, 2009.