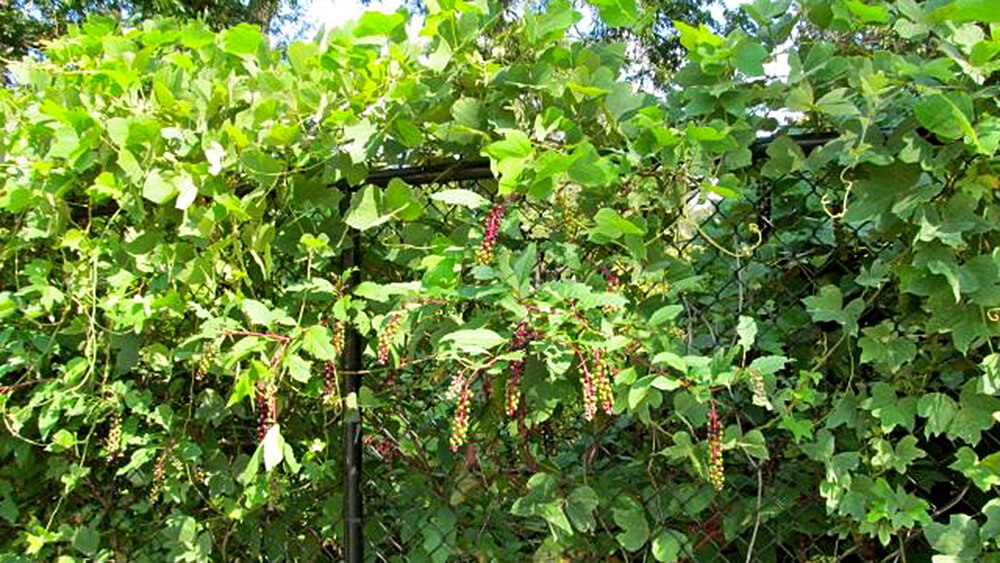 Allison O. Adams discusses perceptions of poke and her experiences preparing the dish.

If some of y’all never been down South too much,
I’m gonna tell you a little bit about this, so that you’ll understand what I’m talking about
Down there we have a plant that grows out in the woods and the fields,
Looks somethin’ like a turnip green.
Everybody calls it polk salad.
Polk . . . kuh . . . salad . . . ungh.

So growls Tony Joe White in his 1969 hit, "Polk Salad Annie," about a notorious woman and a ubiquitous weed. Pokeweed, or poke sallet ("salad"), grows natively with astonishing vigor across the American South. Despite what Tony Joe suggests, however, pokeweed is not an exclusively rural species, in "the woods and the fields." These dark red stalks with their smooth, flat, succulent green leaves thrive in urban and suburban backyards, along roadsides and through cracks in grocery store parking lots. At the height of their growth in late summer, pokeweed stalks bow over from about eight feet, weighted down by loads of berries that ripen from green to deep purple.

There is a rural-urban divide, however, in the consumption of poke sallet. I wondered if this gap might begin to close with a recent turn in the "locavore" movement toward wild food foraging, which seems to have particularly taken root in southern cities. See, for instance, a lengthy article in the New York Times on August 14, 2011, which features Kelly Callahan, a resident of East Atlanta, who began foraging on the abandoned lots of vacant, bank-owned properties in her area. Gardens planted and left behind to re-seed themselves year after year, trees loaded with fruit—Ms. Callahan saw them going to waste and decided to harvest.

On the "wild" spectrum, however, at least in my reckoning, pokeweed is closer to what we might think of as "feral" food—once domesticated crops that have adapted to an uncultivated environment. But gathering and eating poke is not quite Euell Gibbons and Stalking the Wild Asparagus, either. Poke sallet greens were once commercially canned and marketed. The Allen Canning Company of Siloam Springs, Arkansas, paid gatherers by the pound to bring in the raw product. Allen ran its last batch of canned poke sallet in 2000. As the company's supervisor explained on an Arkansas Extension Service web page, "The decision to stop processing poke was primarily because of the difficulty of finding people interested in picking poke and bring it to our buying locations."

Poke lacks a certain appeal for the urban palate. Take my friend Esther, who bought a well-illustrated book on fungi and became an expert identifier of edible mushrooms. She now scours her Chamblee, Georgia, neighborhood and parks, sometimes bringing home more than a pound of wild-gathered chanterelles (about $50 worth). While chanterelles are just as wild as pokeweed, poke does not show up on the menus of upscale restaurants featuring locally grown fare. You do not find it for sale at city farmer's markets or in Community-Supported Agriculture (CSA) deliveries.

My guess is that poke sallet still carries an aftertaste of poverty. Folks ate it because they were poor, and poke grows everywhere. So in urban worlds it is disdained, but it is celebrated at annual festivals in places such as Harlan, Kentucky, and Gainesboro, Tennessee (where festival events include a poke-eating contest).

There are other reasons poke is maligned. Because of its aggressive growth, gardeners consider it a bane, much like kudzu. (In fact, kudzu is just as edible. The new shoots are an excellent green in a quiche; the blossoms, which to me smell like grape Nehi, can be distilled into delicious jellies; and the Japanese commercially cultivate it and use the starch of the roots for tempura batter, tofu, noodles, and gelatinous confections.) I pull most of the poke plants up all summer long because otherwise they would take over my yard. But I always like to leave a few along the back edge of my city lot in Decatur, Georgia. My chickens love to forage on the greens and berries, which the wild songbirds also adore. And I actually think the plants themselves, which I have come to think of as the "long-legged purple ladies," are rather stately.

My maternal grandmother, at least, kept eating poke sallet long after she no longer had to because she loved the stuff. Mee-Ma lived with us in the northeast Georgia mountains when I was in my early teens. She would take a grocery sack on her walks along the country roads near our house and pick the smallest, most tender leaves of the weed. She’d bring a ton of it back to the house, wash it thoroughly, and boil it three times until the house stank like sulfur springs. Then she would scramble it in eggs with bacon grease until the eggs were brownish-green and the house really stank. She’d eat the entire mess with a big hunk of cornbread crumbled in a tall glass of buttermilk.

She didn’t eat the youngest, smallest leaves just because they were the tastiest. Poke is quite poisonous, the roots and berries especially (though not for birds), and the larger leaves can make you very sick. She boiled them three times because that’s how she cooked the toxins out.

In fact, if you read around, the current prevailing wisdom is that only a fool would eat poke sallet, even if you cook it over and over again. My favorite dire warning comes from Wikipedia:

The eating of limited quantities of poke, perhaps of the shoots, may cause retching or vomiting after two hours or more. These signs may be followed by dyspnea, perspiration, spasms, severe purging, prostration, tremors, watery diarrhea and vomiting (sometimes bloody) and, sometimes, convulsions. In severe poisonings, symptoms are weakness, excessive yawning, slowed breathing, fast heartbeat, dizziness, and possibly seizures, coma and death.

Sure enough, according to Jean Weese, a food scientist with the Alabama Cooperative Extension service, "The roots, berries, seeds and mature stems and leaves of pokeweed are poisonous." She identifies at least three types of toxins in the plant and recommends that people avoid eating it, period. "Why would you want to eat something that we know is toxic when there are so many other non-toxic plants out there we can eat?"

There’s no fool like a southern fool waxing nostalgic for her dead granny’s weird cooking, so of course I had to give this a try. Mee-Ma had to have eaten enough poke sallet in her life to kill her several times over, and while she may have suffered from prostration a time or two (mostly due to orneriness), she lived for a long time and died because she was very old. So inspired by her memory and fortified by her persistence, I set about recreating her recipe, which I had not tasted since I was about thirteen.

To begin my poke sallet project, I gathered up a mess from my yard in a basket. I brought it in, washed it thoroughly, carefully removed the stems, and put it through its first braising in salted boiling water.

I drained it, rinsed it, boiled it again in new salted water.

I drained it, rinsed it, and boiled it a third time, this time with a hunk of smoked pepper bacon. Now the house smelled pretty good.

After the last boiling, I noted that the greens were beginning to resemble a traditional palava dish of okra leaves that I had eaten in Liberia a few years ago, which had been delicious, so how bad could this be?

Mee-Ma would have answered that there was nothing that bacon grease couldn’t make taste good. So I melted a generous tablespoon of it in a skillet and let the slimy poke slide in along with some spring onions. As it started to sizzle I added a couple of lightly beaten eggs and some salt and pepper. I cooked them down until the eggs were dry.

It looked familiar. My grandmother would have eaten it, I think, but she would have fussed at me for not having cornbread and buttermilk to go with it. I washed mine down with a big glass of iced tea. It wasn't bad—the poke gave the eggs a darkened flavor that was definitely enhanced by bacon grease. And in spite of some excessive yawning and a wee bit of perspiration, I lived to tell the tale.

My hope for poke is that it will return to popularity not merely for its culinary value, but also for its other useful properties. The rich purple juices of the berries have traditionally been used as ink and dye, and the American Cancer Society cites the potentially curative effects of a certain protein in pokeweed, which has shown some success against tumors in mice and against herpes and HIV in test tube studies. So before you yank that noxious weed out of your lawn, consider its proud past and its possibly noble future.

Allison O. Adams is a writer, editor, gardener, and urban flock keeper in Decatur, Georgia. You may follow her blog at southernurbanhomestead.wordpress.com.