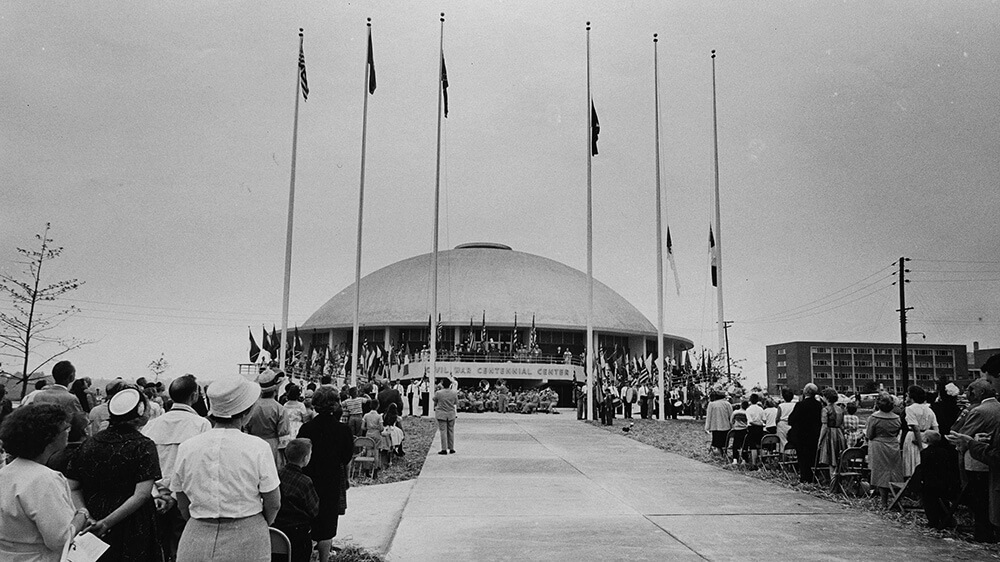 In his commentary on the sesquicentennial commemoration of the Civil War in Richmond, Virginia, Edward L. Ayers examines centennial celebrations and considers the problem of memorializing contested and painful history.

"The Civil War and Emancipation 150 Years On" is part of the 2011 Southern Spaces series "Sightings: Architecture, Art, and Artifact," a collection of reviews and essays examining visual representations of the US South in museums, landscapes, and media. Series editors: Lisa Goff and Grace Hale.

The sesquicentennial of the Civil War catches the nation in the middle of a conversation. Evidence about Americans’ opinions is contradictory and confusing. On one hand, public commemorations show a sensitivity to African Americans unimaginable at the time of the centennial of the war. On the other hand, polls reveal that nearly half the people in the nation believe that states’ rights rather than slavery led to war—and younger people are more inclined than their elders to think this way, contradicting all that their textbooks tell them. Secession balls, Confederate History Month pronouncements, and reenactments of Jefferson Davis’s inauguration steal headlines. It is hard to read the mind of this South.

The messages were clearer fifty years ago, at the time of the centennial. Then, in the early 1960s, the American Civil War was framed by racial division, by Cold War nationalism, by the space race, by a South of unaccustomed prosperity and enduring customs of defiance.

No other place embodied that particular spirit of 1961 quite as well as Richmond, the former capital of the Confederacy. Virginia established the most active commission for the centennial and invested $1.75 million in the effort, much of it for a new building in Richmond. The building combined elements of a department store, a battlefield reenactment, and a UFO. Its saucer of a roof covered life-sized dioramas, uniformed mannequins engaged in battle. The museum boasted the latest technology: Princess phones played recorded messages and elaborate electric maps traced troop movements. A Mercury space capsule proudly perched nearby, an incongruous and yet resonant symbol of the unified nation that emerged from the crucible of war a century before.

Despite the impressive props and setting, the centennial commemoration faced awkward challenges. The events began as Virginia’s elected officials and largest newspapers continued to fight against the Supreme Court and the federal government. Massive resistance shut down schools in several districts between 1956 and 1959 rather than allow black children go to school with white children. The early centennial events in Virginia invoked states’ rights even as they celebrated reunification of the nation.

There was no mention of black Virginians in any of the materials from the centennial commission, which relegated slavery and black people to the shadows. The NAACP reminded “all that the Civil War was fought to preserve the union and end slavery. . . . No attempt to glorify the Confederacy can be valid for it was founded upon . . . slavery . . . the most immoral of all human relations.” The NAACP urged that Americans use the centennial to establish “the justice and equality which were the dream of the founding fathers and . . . the inalienable rights of every American citizen.” Many white Northerners agreed.

The Civil War commemorations of the centennial arrived just as the Civil Rights struggle reached an apogee. The anniversaries of the battles at Manassas, Gettysburg, and Atlanta coincided with struggles in Washington, Selma, and Birmingham. And as the pace of the black freedom struggle quickened, centennial activities slowed. The 35,000 visitors at Manassas in 1961 turned into 5,000 in Appomattox in 1965, only months before President Johnson signed the Voting Rights Act of 1965 into law. The Civil War centennial seemed irrelevant by the time it limped to a close.

Virginia and the South have changed in profound ways in the fifty years following that centennial, but the burden of explaining the Civil War remains. Virginia’s Sesquicentennial Commission, the largest in the nation, began its work in 2006 with a statement that would have been unimaginable in 1961: “It is important to know that it is not a celebration. There is no joy to be found in a war that caused the deaths of over 620,000 Americans, divided families, tore apart a nation, and left cities in ruin. Rather, it is a commemoration. It is a solemn remembrance of the Americans—men, women and children, black and white, from the north and the south—who lived, fought and died for that which they believed.” The first two major conferences of the commission, one at the University of Richmond in 2009 and another at Norfolk State University the following year, dealt frankly with slavery and race.

All across the country, the commissions and other organizations have been working to acknowledge the 150th anniversary of the Civil War, determined to do better this time. And they are. While it is easy to find people to spout the old Confederate party lines (largely because they tend to cluster together in obvious places, including online and in letters-to-the-editor sections of newspapers), inclusive and honest programs in Richmond, Charleston, Washington, and elsewhere show that many people are looking for ways to inspire a more accurate understanding. Some African Americans are willing to attend these events, hopeful that they will finally hear and see recognition of their ancestors’ full humanity. Many white Southerners attend, ready for a more honest accounting of the events that defined the US South for generations.

No matter how much organizers strive to acknowledge the profound human costs and stakes in the Civil War, the programs are, inevitably, unequal to the task. Words and symbols and good will, museums and lectures and conversations, cannot atone for centuries of injustice, and no one thinks they can. No integrated church service, concert, or program, no matter how powerful, can or should erase history. Skeptics of all political persuasions can easily cast every representation of the war and slavery as inadequate, which of course they are.

Monuments have fallen mute. Our faith in buildings and enduring symbols has been shaken. No one knows what a statue of the contradictions at the heart of the American Civil War might look like, how to symbolize a war that began so haphazardly, that cost such an unanticipated loss of lives, that ended with the surprising and precious redemption of emancipation. The technicolor clarity of 1961 has turned to muted sepia, the image blurred at the borders. The subject demands a more powerful lens and a steadier focus than we possess.

Those of us involved in efforts to remember the Civil War and emancipation in the South can find much to be encouraged about. It is foolish as well as self-defeating to dismiss all the good will and striving for mutual understanding at work. The hard fact, though, is that we are only at the beginning of a long struggle to comprehend all the lessons of a war that brought so much suffering, and so much good, a century and a half ago.

BackStory: Virginia Foundation for the Humanities public radio show with a three-part series on the Civil War. Commentators are US historians Ed Ayers, Peter Onuf, and Brian Balogh.
http://backstoryradio.org/three-civil-war-specials/.

The Civil War Trust. Reflecting on the 150th Anniversary of the Civil War.
http://www.civilwar.org/150th-anniversary/.

Stripling, Jack. "U. of Richmond's Leader Pushes City to Face Its Slave History." The Chronicle of Higher Education, June 12, 2011.
http://chronicle.com/article/U-of-Richmond-Chief-Stirs/127879/.

Virginia Sesquicentennial Commemoration of the American Civil War. About the Commission.
http://www.virginiacivilwar.org/commission.php.