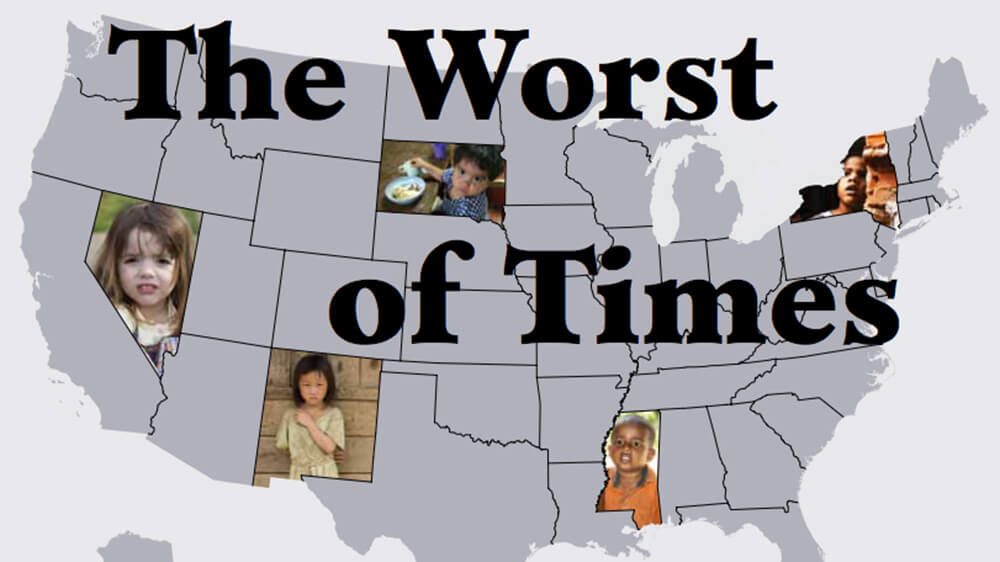 Steve Suitts investigates the implications of a report recently released by the Southern Education Foundation that addresses childhood poverty concentrated in the US South.

A just-released report from the Southern Education Foundation—"The Worst of Times: Children in Extreme Poverty in the South and Nation"—finds that more than 5.7 million children lived in extreme poverty in the United States in 2008—surviving on less than seven or eight dollars per day. Almost one in every twelve children was in a household with an income below 50 percent of federal poverty line.1In 2008, the US Census threshold of poverty for a household of four persons was $22,025 or $5,506 per person. This income amounts to $15.09 per day for each of the four persons in the household. A child in extreme poverty lives in a household where the income is less than half that amount—below $7.54 per day for each person. These children belonged to households in every state of the Union, but they were largely concentrated in the fifteen states of the US South. More than 2.4 million extremely poor children—42 percent of the nation's total—lived in the South.

Ten of the eleven states in the nation where at least one in every ten children are in extreme poverty were in the South.2 The Southern Education Foundation's South includes fifteen states: Alabama, Arkansas, Florida, Georgia, Kentucky, Louisiana, Maryland, Mississippi, North Carolina, Oklahoma, South Carolina, Tennessee, Texas, Virginia, and West Virginia. Mississippi had the largest proportion—14 percent. Louisiana, West Virginia, Kentucky, and Alabama followed at 11 to 12 percent. Arkansas, South Carolina, Tennessee, Oklahoma, and Texas had one child in every ten in extreme poverty. New Mexico with 11 percent was the only non-Southern state with the nation's highest rates of extreme child poverty.

The rise of hardship and extreme poverty for children, especially in the southern and western states, will probably continue beyond the first half of 2010. From June 2009 through March 2010, the number of jobless workers continued to grow in the South and the West. The number of mortgage foreclosures between November 2009 and January 2010 continued to rise in western and southern states. Nine states in the South and four in the West had bank card delinquency rates above the national average during the last three months of 2009. Seven southern states and five western states had delinquency rates for automobile loans of one percent of more—substantially above the national average of .81 percent—in the last quarter of 2009.

During the same period, 10 percent or more of the student loans for higher education were at least sixty days delinquent in most counties in the United States. The overwhelming majority of the overdue student loans were in the South where three out of four counties had delinquency rates of 10 percent or more. In one out of every twelve southern counties, the delinquency rates were 20 percent or higher. These indicators of consumer well-being suggest that the growth of extreme poverty among children will continue into 2011.

Children in Extreme Poverty in US School Districts

At least two out of every five southern school districts in the study had a rate of extreme child poverty of 10 percent or more. In the Northeast, less than one in eight school districts had such a high rate of extreme poverty among children. On the other end of the spectrum, 396 school districts in the nation have less than two out of every one hundred children in extreme poverty in 2008. Only sixteen of these districts were in the Southern states—and eleven of those were in Texas and Virginia. Most of these 396 districts were located in California, Connecticut, Massachusetts, Michigan, New Jersey, New York, Ohio, and Pennsylvania.

Student Demographics in Districts by Rates of Extreme Child Poverty

Federal funding for school districts has had only a minor impact in narrowing this gap. The median district with high extreme poverty rates received an extra $749 in per pupil revenues due to its high percentage of school-age poverty. But, the gap in per pupil spending remained vast—with and without federal revenues

The median school district with a rate of extreme child poverty at or above 10 percent had 63 percent of its students score proficient in state-mandated mathematics examinations in 2008. Districts with less than 5 percent of extreme poverty had a median score of 78 percent—a rate about ¼ better.

Implications and Recommendations for Policy and Practice in Education

"The Worst of Times: Children in Extreme Poverty in the South and Nation" raises serious questions about the impact and validity of current educational policies and practices at every level on children in extreme poverty. These children exist in significant numbers in school districts in every region and state in the country. But, no educational policy at any level today acknowledges America's large population of children in extreme poverty and the extraordinary challenges they face in education.

It is time for a new perspective and framework for the education of America's most vulnerable children. It makes little sense today for the federal government to continue to base national funding for school districts on measures of poverty without also considering extreme poverty. And it makes little sense to count only children between the ages of five and seventeen in calculating poverty and extreme poverty rates for distributing federal funds to school districts. Extremely poor children face life-crippling challenges and problems in education long before the age of five when they enter kindergarten.

In addition, this study's findings on the funding of school districts according to rates of extreme child poverty flatly contradict the nation's cherished commitment to equal opportunity in education.

In these hard times, policymakers and educators can help to assure that the children with the least do not suffer the most as students by adopting an informal practice of an "extreme child poverty impact assessment" that gauges how any major change in policy, practice, or funding in public education might adversely or positively effect the education of children in extreme poverty in their school districts and offered alternatives that could reduce any adverse impact.

In addition, SEF recommends that the White House, the US Department of Education, and other federal policymakers establish a bi-partisan, national commission on the education of children in extreme poverty. This body should underwrite additional research, awaken public understanding and awareness, and identify how the nation's educational policies can assure an equal opportunity to learn for the growing numbers of our poorest children.

Education can be one of the nation's most efficient and effective long-term investments to help young people out of poverty and extreme poverty. The education of extremely poor children also can be one of the best investments for advancing the entire country's future quality of life and high standards of living. Children in extreme poverty represent a fundamental test of America and its enduring values. Their progress in our midst will be the lasting measure of our true worth as a people and as a nation in the worst of times no less than the best.

An Alabama native, Steve Suitts is vice president of the Atlanta-based Southern Education Foundation (SEF) and an adjunct faculty member of the Graduate Institute of the Liberal Arts at Emory University. Suitts' previous essay for Southern Spaces, "Crisis of the New Majority," reported that as of 2008, low-income students made up a majority of students in the South's public schools. The complete SEF report, The Worst of Times: Children in Extreme Poverty in the South and Nation, released on June 15, 2010, can be found free of charge at http://www.southerneducation.org. Begun in 1867, the Southern Education Foundation is devoted to to improving educational excellence and equity in the South.

Isaacs, Julia B. The Effects of the Recession on Child Poverty: Poverty Statistics for 2008 and Growth in Need during 2009. Brookings, December 2009.

US Department of Education
http://www.ed.gov.