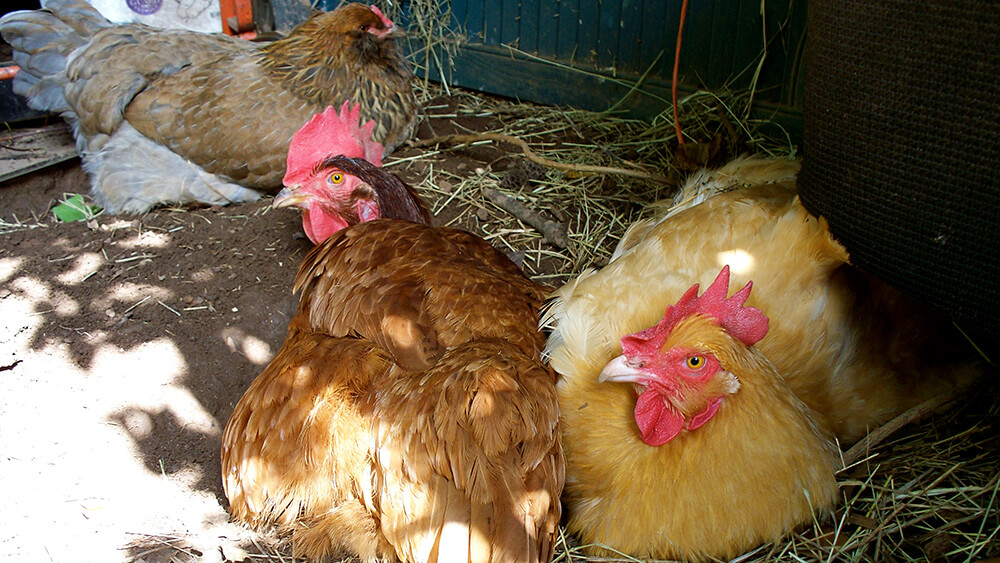 Using her own experiences in Decatur, Georgia, Allison Adams discusses the politics and rising popularity of chicken keeping in urban areas.

For the first two decades of my life, I called the northeast Georgia mountains home. For most of the years since, home has been Decatur, Georgia, a small city east of downtown Atlanta. Here I have built a rewarding career as a writer and editor; I have a close circle of friends and am deeply involved in local issues.

But part of me has never left those hills, a place of almost unreal natural beauty, much of which is federally protected and undeveloped. I have never quite been able to put a metro county license plate on my car (I sport a Trout Unlimited tag). And I have sought ways to draw my rural roots closer to my city self.

Part of staying connected to the place of my youth has meant becoming an active urban environmentalist. I volunteer with local "green" organizations, and as the daughter of energetic home gardeners and canners, I am very involved in the sustainable food production movement. And since I cram food gardens into every sunny nook my backyard has to offer, keeping a small flock of chickens seemed to make sense, for both the eggs and the manure compost.

When I began to investigate the possibility some seven years ago, I was surprised to learn that it was perfectly legal to have a coop in Decatur. So I approached my next-door neighbors — I was thinking about getting a few chickens, and would that be okay with them? — and was again surprised that they had been thinking about it, too. We joined efforts. They brought design and carpentry skills, and I had an existing building that would serve as a fine henhouse. Since 2004, we have shared the costs, labor, and benefits of our birds. Call it a coop co-op.

Our little poultry project tapped into a passion among people who want to model a certain kind of ethical living — eating locally and sustainably — and to connect with one another in an urban world. Books have been written. Documentary films have been made. I was interviewed for a feature on National Public Radio's All Things Considered last year.

I suspect that for those of us who keep urban flocks to connect an environmental ethos with a passion for good food, there is also a yearning for an idealized, pastoral past and an agrarian vision of virtue and abundance. So many city dwellers descend from rural roots — or the city has sprawled over land that used to be rural. Frequently people tell me something like, "My grandmother kept chickens. I used to love to gather the eggs." Somehow the notion evokes small family farms and green fields. Quite a contrast to the images of corporate factory farms with their suffering creatures in films like Food, Inc. and books like Fast Food Nation.

Urban flock keeping has grown into a fully-fledged movement since we started in 2004. News of our endeavor spread quickly as we hammered, stapled, and stretched chicken wire on our new coop, most of which we built from recycled materials. Neighbors we had never met appeared at our doors, drawn to what amounts to an exotic species amid Georgia's most densely populated urban space. Kids brought other kids. We found ourselves lecturing informally on the requirements and benefits of keeping chickens in the city.

By the fall, we had had so many visitors that we decided to throw a party to celebrate all things chicken. The first Cluckapalooza, now an annual event, drew about seventy-five friends in September 2004. We strung lights around the coop and decorated it with flowers and art. Guests admired both the "east wing" (my side) and the "west wing" (the neighbors') of the coop. Everyone feasted on a potluck dinner, including deviled eggs from our hens and treats from my garden, now enriched with copious chicken manure. Games included a clucking competition and a Funky Chicken dance-off. Musicians brought their instruments and played their favorite chicken songs (there are more than you'd think).

Meanwhile, a local environmental education nonprofit, the Oakhurst Community Garden, had asked us to develop a two-hour workshop. That October, we offered the first "Chicks In the City: Keeping an Urban Flock for Eggs, Compost, and Endless Amusement," on topics ranging from local laws and coop design to breed selection and health issues. The class was over-enrolled, and it had a waiting list. And so it has gone since we began teaching it several times a year, attracting participants from in-town as well as the suburbs and exurbs. Coops were springing up across metro backyards.

We set up the newsgroup "Citychickens" to trade advice about local breeders, ideas for coop designs, predator updates (coyotes and owls), and suggestions about where — or where not — to acquire birds. We handed the class off to another team of instructors two years ago but taught it again to about eighty people at the 2009 Georgia Organics annual conference. This February, I led an abbreviated version for the first-ever Chicken Symposium, sponsored by the Oakhurst Garden.

The momentum continues: Atlanta now has its own "Chicken Whisperer" (Andy Schneider) with a radio show and web-based business for city flockkeepers. He also is keeper of a very active local "MeetUp" group that boasts more than eight hundred members. There is an annual "Chicken Tour of Homes" in the spring, and I recently hosted a class of kindergarteners from a nearby elementary school. A similar desire to connect kids to their food sources led to "Team Chicken," a collective of families in a neighborhood working together to care for a coop.

For some, however, the city chickens trend is baffling. Decatur's laws are clear and reasonable about coop placement, space per bird, and cleanliness, as are Atlanta's, but many other municipal codes are silent. A number of cities, towns, and counties are facing an unexpected ambiguity: if there is nothing on the books about chickens, is it legal or illegal?

Interestingly, I have noticed that the newer the city code, the less likely it is to include poultry and fowl ordinances (Decatur's incorporation dates back to the early nineteenth century). I suspect this has something to do with the post-World War II/mid-twentieth century impulse to distance a growing suburban middle class from its subsistence farming past. Remember that fond memory of egg gathering with grandma? It is likely the child who carried that image to adulthood never watched grandma handle the messy business of slaughtering a hen that was no longer laying. After decades of Depression and World Wars, it was time to ban the farm animals from the yard, cover the ground where the coop had been with a green lawn and chemical fertilizer, and buy chickens and eggs from the supermarket. The movement went hand-in-hand with the growing disappearance of sidewalks in many cities — the automobile was a sign of prosperity. Walking was no longer fashionable.

Just as environmental concerns have inspired many neighborhoods to become more walkable again, the revival of interest in local food production is leading to clarifications of vague laws or even the writing of new ones that regulate city chickens. While some simply do not yet welcome the practice, citing issues of noise, odor, and rats (all easily preventable), others are taking a serious look, and the city chickens movement is gaining ground around the South. In 2008, Gulfport, Florida's city council passed new regulations that allow residents to keep chickens, thanks in large part to an information and awareness letter-writing campaign orchestrated by the Chicken Whisperer and the Atlanta Chicken MeetUp group. In Birmingham, a new organization calling itself CLUCK ("Citizens for the Legalization of Urban Chicken Keeping") hopes to work with cities — including Birmingham, which does not allow chickens in residentially zoned areas — to change local laws. In the past four years, Raleigh, Durham, and Chapel Hill all passed ordinances to make city chickens legal. Raleigh has its own citywide coop tour.

The effort to persuade Roswell, Georgia, to change its laws to allow poultry gained some public notoriety in 2009. A city resident filed a complaint against a neighbor with a coop of more than 150 birds on about an acre of land. After the chicken owner successfully filed a lawsuit to have the existing ordinance thrown out because of its ambiguous wording, Roswell adopted language that bans (noisy) roosters and bases the number of birds per residence on lot size. And who was the chicken owner's attorney? Former Georgia governor Roy Barnes, a professed chicken lover.

In nearby Dunwoody, an Atlanta suburb that incorporated as a city only two years ago, a friend of mine and her family recently built their first coop and acquired their first hens. Suddenly they found themselves in the midst of an effort to pass a set of backyard chicken laws for the new municipality — it had occurred to no one to write them into the original code. As of this writing, they need only one more City Council member's vote. Their only challenge, she tells me, are some older residents who grew up on farms. They are adamantly opposed.

I suggested she invite them over for a cocktail and chat out by the coop. And maybe some deviled eggs.

Allison O. Adams is a writer, editor, and urban flock keeper in Decatur, Georgia. You may follow all the news of life with and for her chickens on her blog, southernurbanhomestead.wordpress.com.

Chicks in the City
http://www.pba.org/programming/programs/thisisatlanta/2762/.