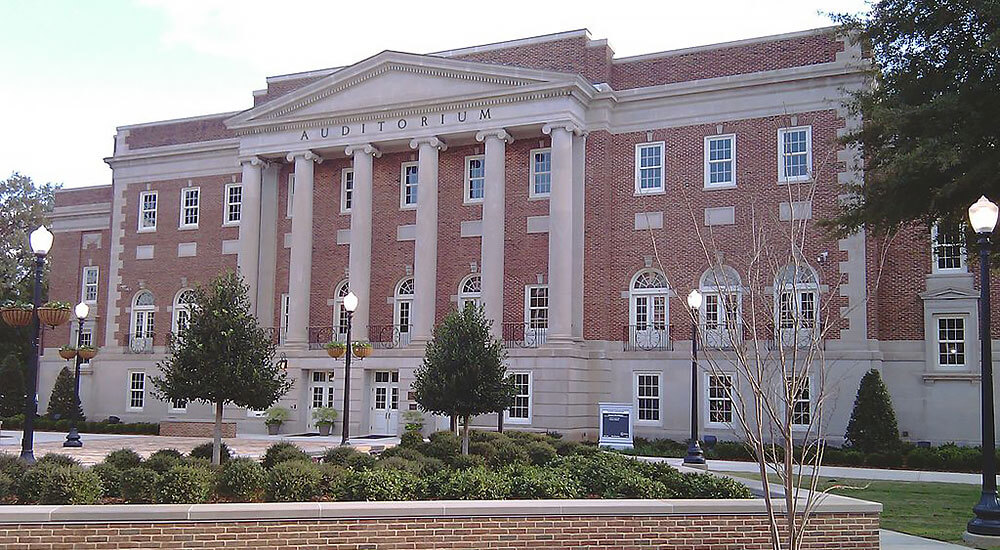 In her short film and supporting essay, Sarah Melton explores issues of historical memory and memorialization in the US South through the site of Foster Auditorium at the University of Alabama. On June 11, 1963, African American students James Hood and Vivian Malone successfully desegregated the University by registering at Foster Auditorium in spite of George Wallace's famous "stand in the schoolhouse door." Today, the building is not in use and little effort has been made to memorialize the events of June 1963.

"A Sleight of History: University of Alabama's Foster Auditorium" was selected for the 2009 Southern Spaces series "Documentary Expression and the American South," a collection of innovative, interdisciplinary scholarship about documentary work and original documentary projects that engage with regions and places in the US South.

A Sleight of History: Film and Essay

My fellow filmmaker Marshall Houston and I became interested in Foster Auditorium while searching for a topic for our documentary filmmaking course at the University of Alabama. We both knew the story of George Wallace's stand in 1963, but were surprised at the building's level of decay: the administration warned us that structural instability might cause the roof to collapse while filming. We decided to use Foster Auditorium to examine the hesitation surrounding civil rights memorialization. The building embodies the complexity of historical memory and the consequences of decades of neglect.

We began the process by filming the exterior of Foster, not only broken doors and windows, but the structure's physical beauty. In an effort to tell the story of a powerful place, a site that represents tangible social change, we focused upon a few key images. Inside, we saw a furnace that was radiating heat. No one seemed aware that this space was still functional. Through interviews, which included a variety of historians, administrators, and activists, we hoped to present the challenges and benefits of memorialization. Dr. Cully Clark, author of The Schoolhouse Door: Segregation's Last Stand and former dean of the University of Alabama's College of Communications and Dr. Kari Frederickson, professor of US history, provide context, while Odessa Woolfolk, a founder of the Birmingham Civil Rights Institute, links Foster Auditorium to civil rights tourism. Cleo Thomas, a former university trustee, discusses the significance of Foster's abandonment. We combined these segments with impromptu student interviews to reveal the general lack of knowledge about Foster and its history. The dilapidation of the building serves as a visual counterpoint to pervasive, manicured Civil War memorials.

Foster Auditorium, once the university hub, is now relegated to the margins of campus. The building, completed in 1939, served as the site of basketball games, dances, registration, and graduation throughout the 1940s and 1950s. On June 11, 1963, Foster Auditorium entered the national spotlight when Alabama governor George Wallace refused to allow two African American students, Vivian Malone and James Hood, to register for classes at the building. After President Kennedy deployed the National Guard, Wallace stepped aside, allowing the students to desegregate the University. In his 1963 inaugural address, Wallace had promised "segregation today . . . segregation tomorrow . . . segregation forever," and he assured voters that he would make every possible attempt to block federally mandated desegregation, even if, as he declared in his campaign, he had to "stand in the schoolhouse door." In fact, the University already a history of desegregation: in 1956, Autherine Lucy became the first African American to enroll at Alabama. After only three days, however, the University administration, claiming that it sought to avoid massive protests and violence, expelled her. Despite this first attempt, Foster Auditorium remains the University's most visible symbol of desegregation.

The building remained in use for decades afterward, housing women's athletics and the Department of Kinesiology until 2006 when the Auditorium was closed due to structural instability. There was no public commemoration of its role in the Civil Rights Movement until a group of faculty and community members petitioned for its inclusion on the National Register of Historic Places in 2003. In 2005, a small plaque marking the events of 1963 was placed on the building. Foster currently receives little traffic, making the plaque an ineffective memorial. Though Foster, along with sixty-four other buildings, appears on the University's "virtual tour," the website devotes a sparse two sentences to the stand at the schoolhouse door events of 1963.

Desegregation was a contentious issue in other schools in the US South, and each school has approached commemoration in a different way. At the University of Georgia, a mob greeted Hamilton Holmes and Charlayne Hunter when they entered in 1961. A year later, two civilians died when James Meredith attempted to integrate the University of Mississippi. UGA renamed its registration building for Holmes and Hunter in 2001, and UM dedicated a statue in honor of Meredith in 2006.

In 2009, the UA student organization Creative Campus Initiative launched the (now defunct) microblog www.talkaboutfoster.com to "increase discussion on Foster Auditorium . . . within not only the student body but the community as well." Though many students are unaware of the building's history, efforts like the TalkAboutFoster blog indicate an ongoing interest in the site and hopes for future restoration and reconciliation efforts there.

Sarah Melton is a PhD student at Emory University's Graduate Institute of the Liberal Arts. In 2009, she filmed this project as part of her M.A. work in American Studies at the University of Alabama. Her research interests include visual culture, historical memory, documentary practices, and the US South.

Thanks to Marshall Houston, an undergraduate at the University of Alabama, who created the first version of the film with me in a 2008–2009 class.