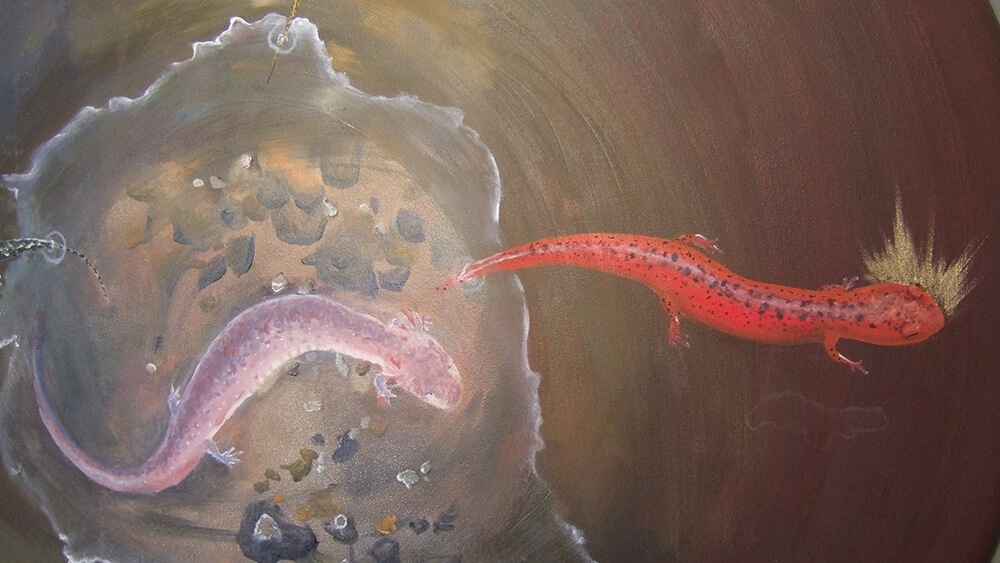 Nancy Lowe approaches the idea of "single centers of creation" through salamander diversity in the Southern Appalachian mountains.

In this sampling from ORIGIN, a collaborative exhibition celebrating the 150th anniversary of On the Origin of Species and the 200th anniversary of Charles Darwin's birth, artist Nancy Lowe approaches the idea of "single centers of creation" through the example of salamander diversity in the Southern Appalachian mountains.

Excerpt from Charles Darwin's On the Origin of Species, 1859:

It has been thought that, because of the tremendous diversity of lungless salamanders (Plethodontids) in the Southern Appalachians and because of the age of this mountain range, these salamanders may have originated in our veritable backyard. Recent phylogenetic research has called into question this biogeographical idea; perhaps it is not as simple and straightforward as we thought. Species originate from one place, they disperse, migrate, branch into new species, some die off . . . but then climates change, continents shift, and some groups re-evolve ancient characters, or several distantly related groups evolve similar traits (called convergent evolution), confusing the evolutionary biologists who are trying to sleuth these mysteries. We only have a few twigs from which to guess at the shape of the whole tree.

Nevertheless, I find this idea of salamander origins in the Appalachians a powerful metaphor for origins of life. There are points of origin. Each branching on the tree is a point of origin and the beginning of a new line in the story. If we could trace all our origins all the way back, we would find that we salamanders, we hominids, we birds, we slime molds and mosses all came from one place—out of the water and out of the earth. The habitat of most salamanders is the moist earth, the kind of dark place that is recycled from death, yet lush with life. For me an image that bores into the center of the earth, to our origins, is equally sacred as one that opens up into heaven. Thus I have strived to honor this origin story with an earthy mandala.

Species of Plethodontid Salamanders of the Southern Appalachians

Nancy Lowe is a naturalist artist and scientific illustrator based in Atlanta, Georgia. She received her Bachelor of Fine Arts from the School of Art Institute of Chicago in 1986 and a post baccalaureate honors in biology from Georgia State University between 1992 and 1994. Currently she teaches nature journaling and scientific artistry at schools, universities, and museum workshops throughout Georgia.