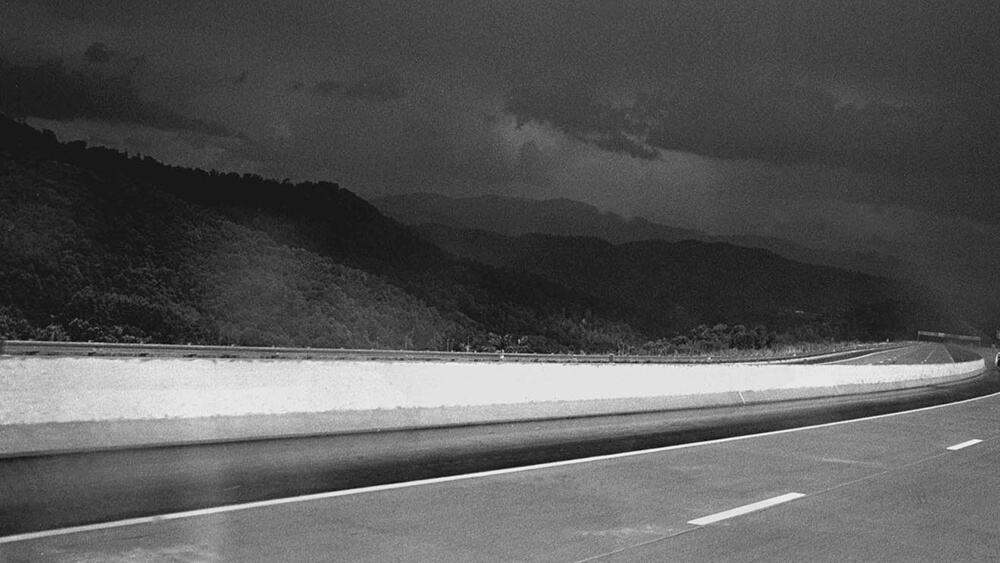 Through an extensive archive of photographs and interviews begun in the mid-1990s, Rob Amberg documents the construction of a nine-mile section of US Interstate Highway 26 (I-26) through rural, mountainous Madison County, North Carolina. This essay presents Amberg's ongoing documentary of the I-26 corridor, updated as the photographer makes new images available to Southern Spaces.

"I-26: Corridor of Change" is part of the 2008 Southern Spaces series "Space, Place, and Appalachia," a collection of publications exploring Appalachian geographies through multimedia presentations.

"Good roads take people both ways," said a Madison County resident, anticipating the completion of I-26 from Charleston, South Carolina, to the Tennessee Tri-Cities area (Bristol-Kingsport-Johnson City). Starting in 1994, I began photographing, interviewing, and collecting objects to document the cutting of a nine-mile stretch of I-26 through some of North Carolina's most spectacular vistas and some of the world's oldest mountains. During the surveying, mapping, core rock sampling, removal, and construction phases, I made over ten thousand negatives and hundreds of finished prints, gathered more than two dozen oral histories, and collected boxes of information and artifacts. I wondered what something so materially "real" as the coming of I-26 might evoke through the framing, detail, and texture of photography. The result was not a pro- or anti-development project, but one that voiced a range of emotion and opinion, often from the same people (whether newcomers or natives).

Like all newcomers, I was often greeted by, "You ain't from around here?" And, people were right to ask, to question my motivation. Why was I here? What right did I have to assume that I could represent in my documentary work a culture I knew little about? I was sometimes embarrassed that my photographs offered no tangible benefits in a place that seemed to value useful things that aided survival: firewood, bean seeds, a cut of cloth. Then, as I grew more certain of my photography, I felt that pictures offered memories full of historical and personal detail, conveying the texture and feeling of the life around me. Rather than seek the perfect photograph, the longer I lived in Madison County, the more I became interested in recording the process of events, and in documenting social and environmental change. When I arrived in Madison County, North Carolina, in 1973, I possessed every stereotype possible about mountain people. And I am certain that my new neighbors had equally suspect notions about me and the small wave of people moving into their midst. At first, I intended to produce the definitive book of photographs on mountain culture. I had very preconceived ideas of what that meant. I was taken with the romantic idea of wizened faces, old women in doorways, men plowing into the sunsets, hog butchering in the misty morning light. That's what I thought the place was about. Those early photographs, as I look at them now, feel like clichés. Given time, my increasing personal involvement, and the challenges of earning a livelihood, I was able to overcome my preconceived notions and try to understand the county's people for who they were and are.

To comprehend the costs of something as transformative as I-26 we must value intangible, but real concerns often dismissed as "nostalgia" — heartbreak for times past and beauty lost — joined with an awareness of environmental degradation, and anger over the direction in which our society often moves. But how do we place a value on a story? Or on a grave marker? How do we choose the narratives that affect our future? What price do we pay for allowing our memories, our environment, our places to be dismantled one step, one mile, nine miles at a time?

I have been photographing, interviewing, and collecting along the site of the I-26 Corridor since 1994. This has involved coverage of the mapping, core rock sampling, removal, destruction, and construction phases of the project. Highway work, and my documentation of it, continued until 2003. To date, I have produced over 10,000 negatives, 110 finished prints, 25 oral history interviews and collected boxes of other narrative information and artifacts from the Corridor.

My photography and writing from Madison County are concerned with time, place and memory. The work is also about relationships, personal expression, detail and texture, framing, and curiosity about how something "real" might look as a photograph. My work is also about change and, to some degree, about affecting social change. Using pictures as a tool for social change was my earliest motivation in photography, although my illusions about affecting change in anyone have evolved over the years. But mostly, what I do is all about time and place and memory. So, for the next little bit, I would like to share some of my work from Madison County and relate some of what I have learned along the way.

Click on each lettered site to see the associated images. 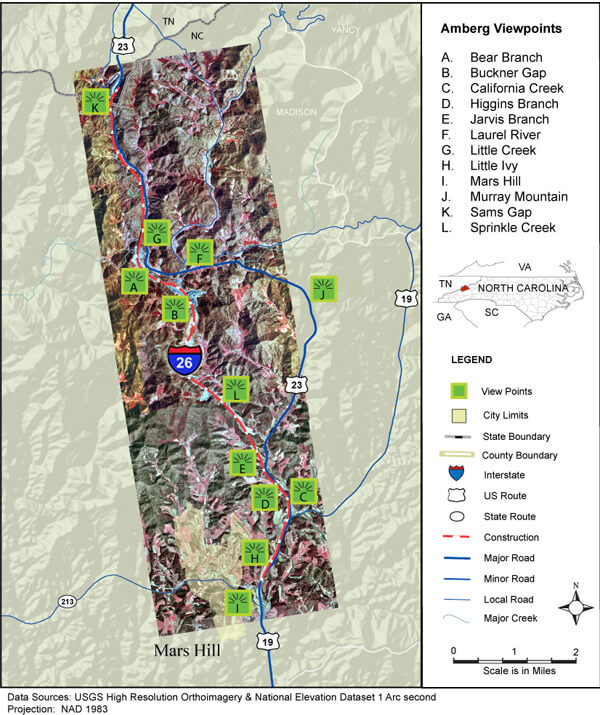 Madison County is a rural, agricultural county located in mountainous, northwestern North Carolina. Throughout its history, the county's rugged terrain has prevented easy access to outlying cities such as Asheville or Knoxville. Winding mountain roads and insular hamlets have meant long bus rides for school children and extended trips for basic services such as food and health care. Twenty-five percent of Madison County's land is federally owned, which, coupled with a small manufacturing sector, has meant a minimal local tax base. Historically, the county has had one of the lowest per capita incomes and educational levels in the state. Home to small-farm families growing a diversity of household crops and livestock, and sustaining a variety of traditional culture forms (music, foodways, religion, storytelling, handicrafts), Madison was also the state's leading producer of burley tobacco.

In the latter part of the twentieth century, like rural counties across the United States, Madison experienced rapid change. In the 1960s, a significant number of newcomers entered Madison County from outside the Southern Appalachian region. The earliest of these were back-to-the-landers and individuals seeking a slower pace as well as a sense of community and belonging in the mountain culture. Adjustments in the federal tobacco program and an aging population took a toll on the county's family farms. The majority of Madison residents now work away from home and their grown-up children are choosing to live elsewhere. Access to higher-paying jobs has often come with the severing of deeply-rooted local connections.

Since the early 1980s, a steady stream of new residents has arrived, including retirees and young professionals, with no ties to the area and, often, with little interest in its past. Tourism plays an increasing role in the county's economy through river rafting, hiking, and events such as music and craft festivals. In the early twenty-first century, life in Madison County combines the persistence of established local networks with the transformations accompanying new technologies, a diversifying and more transient population, new money, and the effects of I-26, a transportation corridor that connects the Ohio Valley with the Atlantic Coast.

With construction of the Tennessee portion of I-26 nearing completion in 1995, the North Carolina Department of Transportation surveyed the route the road would take across Madison County. The I-26 Corridor was promoted as a safe alternative to the existing road and as an economic boon to the area. Old US Route 19-23 was a steep, winding, unimproved two-lane shared by school buses, elderly residents, and tractor trailers, where accidents and fatalities were a regular occurrence. By early 1997, the project was underway with rights-of-way secured, timber being removed, and bulldozers chewing on Reed Mountain and Ramsey Ridge. The blasting of mountainside and the filling of valleys for this link of new highway displaced more than forty families, and forced the relocation of three churches and their cemeteries. From the three thousand foot elevation of Sam's Gap on the North Carolina-Tennessee border, engineers designed I-26 to descend at a maximum six-degree grade to the college town of Mars Hill (at 2,200 feet). Construction of the six-lane, $230 million section of road was finished in 2003.

The I-26 Corridor was the largest earth-moving project (fifty-million cubic yards) ever contracted by the state of North Carolina. It includes the tallest bridge in the state and the largest single order for culvert pipe ever recorded in the United States. The nine-mile section of road cuts through some of the most rugged country in the eastern US, along centuries-old routes used by Natives and settlers. Construction required the removal of hundreds of acres of hardwood forests, high upper pastures, and farmland. The highway cut through National Forest land as well as prime black bear habitat, and crossed the Appalachian Trail.

Most Madison County residents remain skeptical about the promised economic benefits. While I-26 provides a direct link between the southern Ohio Valley, the mountains of western North Carolina, and the coastal plains of South Carolina, given the county's topography and history, job growth is likely to be minimal, beginning with fast food franchises, and chain motels, and the service jobs that accompany them. Land prices, however, have already markedly increased, as have taxes, and residential growth. Priced-out of the purchase of land, longtimers struggle to keep what they have, and find it difficult to pass land on to their children.

Rob Amberg is an artist and photographer living in Madison County, North Carolina. His work documents social life and customs in the rural US South, focusing specifically on North Carolina. He is the author of The New Road: I-26 and the Footprints of Progress in Appalachia (Center for American Places at Columbia College Chicago, 2009), and Sodom Laurel Album (University of North Carolina Press, 2002). Current work and updates can be found on his website, Pictures and Words.

Completed work on I-26, Corridor of Change has been presented in a number of formats. An exhibition of photographs, captions, and text panels, titled "I-26, A Work in Progress," was mounted at the North Carolina Museum of History in 1999 and traveled to other venues since then. Essays and portfolios of photographs have been published in the Marshall News Record, Southern Changes, the Southern Quarterly, and Audubon Magazine. This work was also presented as a performance and lecture piece that includes music, slides, and an oral history dialogue, to the Oral History Association 2000 Conference and the 2001 Appalachian Studies Conference. The project is also presented to public libraries, universities and community groups with the Speakers Bureau of the North Carolina Humanities Council.

In fall 2017, Southern Spaces updated this publication as part of the journal's redesign and migration to Drupal 7. Updates include image and text link adjustments, as well as revised recommended resources and related publications. For access to the original layout, paste this publication's URL into the Internet Archive: Wayback Machine and view any version of the piece that predates August 2017.

Shopes, Linda. "Oral History and the Study of Communities: Problems, Paradoxes, and Possibilities." The Journal of American History 89, no. 2 (2002).

"Documenting the American South: Oral Histories of the American South," The University of North Carolina at Chapel Hill. 2004.
http://docsouth.unc.edu/sohp/searchresults.html?InterviewerSelect=1541-Rob%20%20Amberg. 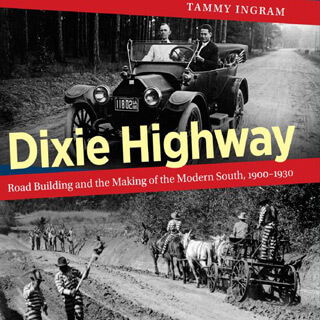 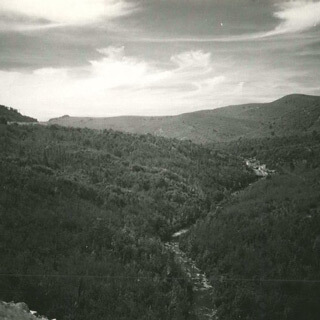 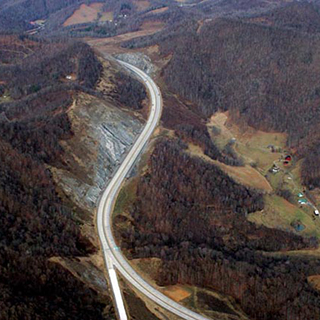