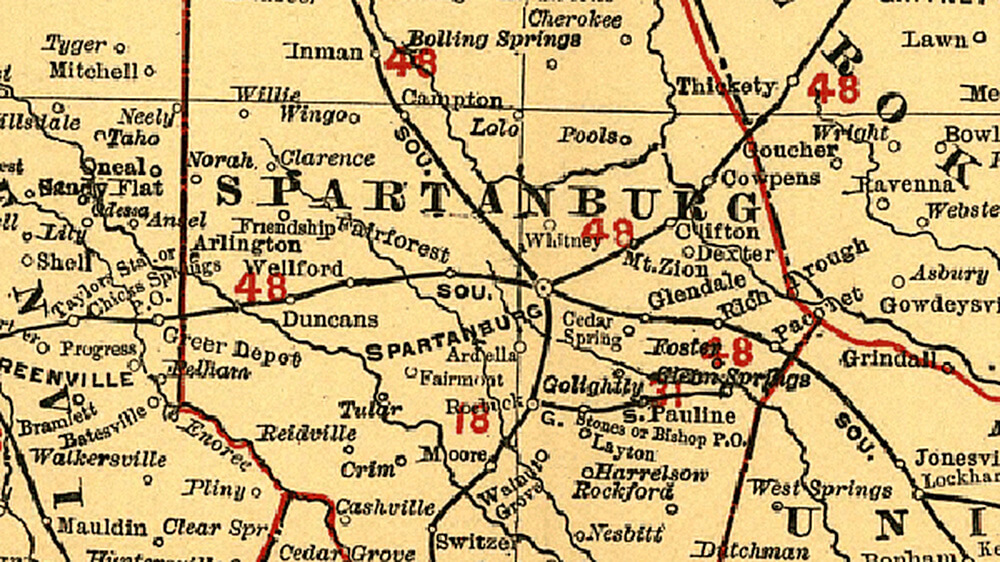 This essay introduces an Upcountry South Carolina family’s remarkable collection of quilts. At the heart of the story is Mary Louisa Snoddy Black (1860–1927) who acquired sixteen quilts made by women in her family between 1850 and 1917. Presented here are seven of the Black family’s quilts with a discussion of their design and construction, the motivations and aesthetic choices of the quiltmakers, and the historical moments in which the quilts were made. 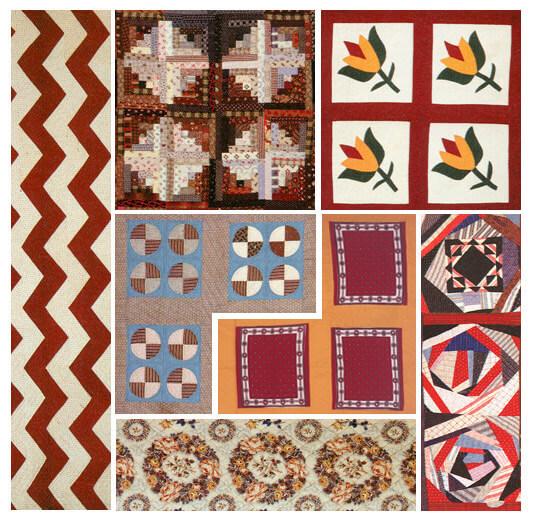 The seven quilts presented in this essay were made in the Carolina Piedmont between the mid-nineteenth and the early twentieth centuries. Part of a collection of sixteen quilts, they once belonged to Mary Louisa Snoddy Black (1860-1927), who lived her entire life in Spartanburg County, South Carolina.

Collections of family quilts are not unusual. What gives these special significance is their age, provenance, and the attention Mary Black devoted to ensuring that the names and relations of the makers would be remembered. The number of quilts and the care with which they were labeled suggests that she thought of them as a collection, the culmination of the work of many hands. Sometime in the mid-1920s, Mary met with her two adult daughters, Rosa and Mary Kate, and passed along information about the quilts and quiltmakers, which were sewn, as small slips of paper, onto each quilt.

As the historical archaeologist James Deetz urged, those "small things forgotten," the ordinary objects that remain from past generations, must be examined in "new and imaginative ways" to achieve "a different appreciation for what life is today, and was in the past." When interpreted thoughtfully and alongside other historical materials, Mary Black's collection can convey the values and experiences of her family, beginning with the arrival of her great-grandparents in the Carolinas in 1773 and continuing through her descendants.

Nearly all of the white colonists to enter the Carolina backcountry in the eighteenth century arrived from Pennsylvania through the Shenandoah Valley into Virginia and the Carolinas. In the 1760s, Mary Black's Scotch-Irish maternal ancestors staked out claims, cleared land, and established farms on a few hundred acres in what would become Greenville and Spartanburg counties. Soon they were joined in the Tyger River watershed by what would become the paternal side of her family, the Snoddys, immigrants from County Antrim, Ireland, who came by way of Charleston in the 1770s. By the end of the century, the Cherokee who once inhabited this area of South Carolina had ceded it, succumbing to the effects of smallpox, treaties, and armed conflict.

At first, the self-sufficient farmers in this heavily wooded landscape owned few slaves. Enmeshed in a spreading web of neighbors and kin, they produced food, shelter, and clothing, sometimes trading for goods from Charleston. Communities were centered around water-powered grist and flour mills, general stores, and small churches. Many of the original settlers, including members of the Snoddy family, were Presbyterian, but in the fervor of camp meeting revivalism, the ranks of Baptists and Methodists grew rapidly. Following the invention of the cotton gin in the late eighteenth century, cotton as a cash crop spread from the Carolina Low Country into the Piedmont. Through the growing of cotton for sale, the increasing use of slave labor, and the purchasing of fertile land, Mary Black's grandfather Isaac Snoddy (1770-1842) prospered, owning at the time of his death two-thousand acres and forty slaves. Mary's father, Samuel Snoddy (1815-1898), and mother, Rosa Benson (1826-1908), grew up as members of locally prominent familes.

In 1860, when Mary Louisa Snoddy was born in a large, new farmhouse on Jordan Creek, the US Census valued her parents' holdings at $11, 617, which included real estate of $5,000 and twelve slaves. Samuel and Rosa's farm included two hundred acres of crop land and 650 acres of meadows, woodlands, and fallows. In addition to cotton, the major cash crop, the farm produced corn, wheat, oats, and rye to feed the household and livestock, as well as peas, beans, Irish and sweet potatoes, milk and butter.

Samuel Snoddy survived service in the Confederate Army, coming home at the war's end to Rosa, their three children, and a devastated economy. The Snoddy house intact, Samuel turned his labor to farming again and worked to reestablish the family's security. The youngest of the three children, Mary first attended a local log school. By 1878 she was a student at the recently opened Williamston Female College, some thirty miles from home, but reachable on the newly-laid Richmond-Danville Railroad. In 1889, Mary Louisa Snoddy married Dr. H. R. Black in the parlor of Mary's parent's home and set up housekeeping in nearby Wellford. In 1894, H. R., Mary, and their three young children moved to a large house in the growing railroad, cotton trading, and textile manufacturing town of Spartanburg, eight miles away. Between 1890 and 1900, Spartanburg's population doubled from 5,544 to 11,395. Not just the town was growing; during the 1890s, the development of scattered textile mill villages swelled the population of the entire county. In 1907, Dr. Black joined with other medical practitioners to build Spartanburg's first hospital.

The Black family kept one foot in the city and one in the country. They participated in the social and economic affairs associated with living in town, but they cultivated a backyard garden, managed a farm in Wellford, and maintained close relations with rural family and friends. Mary Black does not seem to have been involved in quiltmaking during this time; during the early twentieth century, using quilts as bedcovers would have been considered quaint and old-fashioned among genteel city dwellers.

The sixteen quilts in Mary Black's collection were made between about 1850 and 1917. Mary's quilts included both revered relics and ordinary patchwork. Over time however, all the quilts grew in importance as reminders of family identity and the reciprocal obligations of kinship. The language and traffic of quilts circulated in the private sphere among women, who recycled dresses, shared patterns, and paid other women to piece and to quilt. Quilts and household heirlooms served to commemorate and reinforce the private, domestic relationships important to women.

Click on each highlighted name to learn more about each family member. 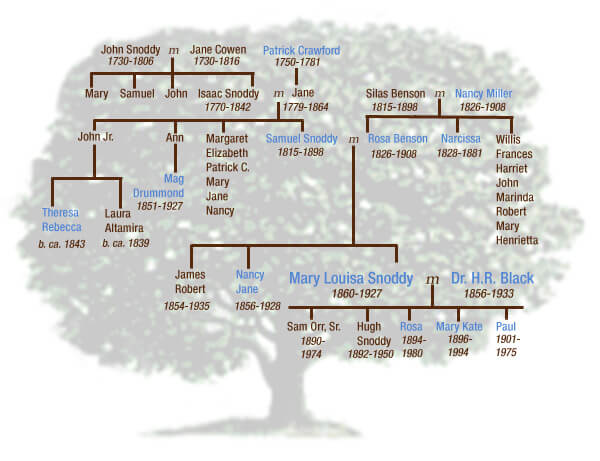 Patrick Crawford (1750-1781) was the great grandfather of Mary Snoddy Black. He and his family immigrated from Ireland to the Tyger River area in northern South Carolina with his wife and children. Crawford fought on the Patriot side of the Revolutionary War until, in 1781, he was mistakenly shot and killed by a friend during a scouting mission.

Narcissa Benson (1828-1881) was the second of the eleven children of Silas and Nancy Miller Benson. She remained single throughout her life, and in 1878, following the death of her thirty-five-year-old sister Margaret Benson Nesbitt, Narcissa became the guardian and caretaker of Margaret’s three small children. Narcissa died in 1881, at the age of fifty-three. In a will executed before her own death, Narcissa bequeathed to each of these children $100 and "a nice bedquilt and counterpane."

Margaret Drummond (1851-1927) was known as “Cousin Mag” by members of the Snoddy and Black family. She was the daughter of S. N. Drummond and Ann Snoddy Drummond (the sister of Samuel Miller Snoddy). Mag Drummond remained unmarried throughout her life. At the time of the 1870 Census, she was nineteen years old and living in Greenville with her married sister, Buena Vista Westmoreland, who had a year-old daughter. Later she frequently stayed at the home of her widower cousin James Robert Snoddy, often sewing for his sons or cleaning house. The 1910 Census enumerated Mag Drummond, age fifty-nine, as living with the family of her brother Jasper. Ten years later, she was listed as a sixty-nine-year-old “servant” in the home of Frank Woodruff, in the town of Woodruff. On August 4, 1927, J. R. Snoddy noted in his journal that “Cousin Mag died last night.”