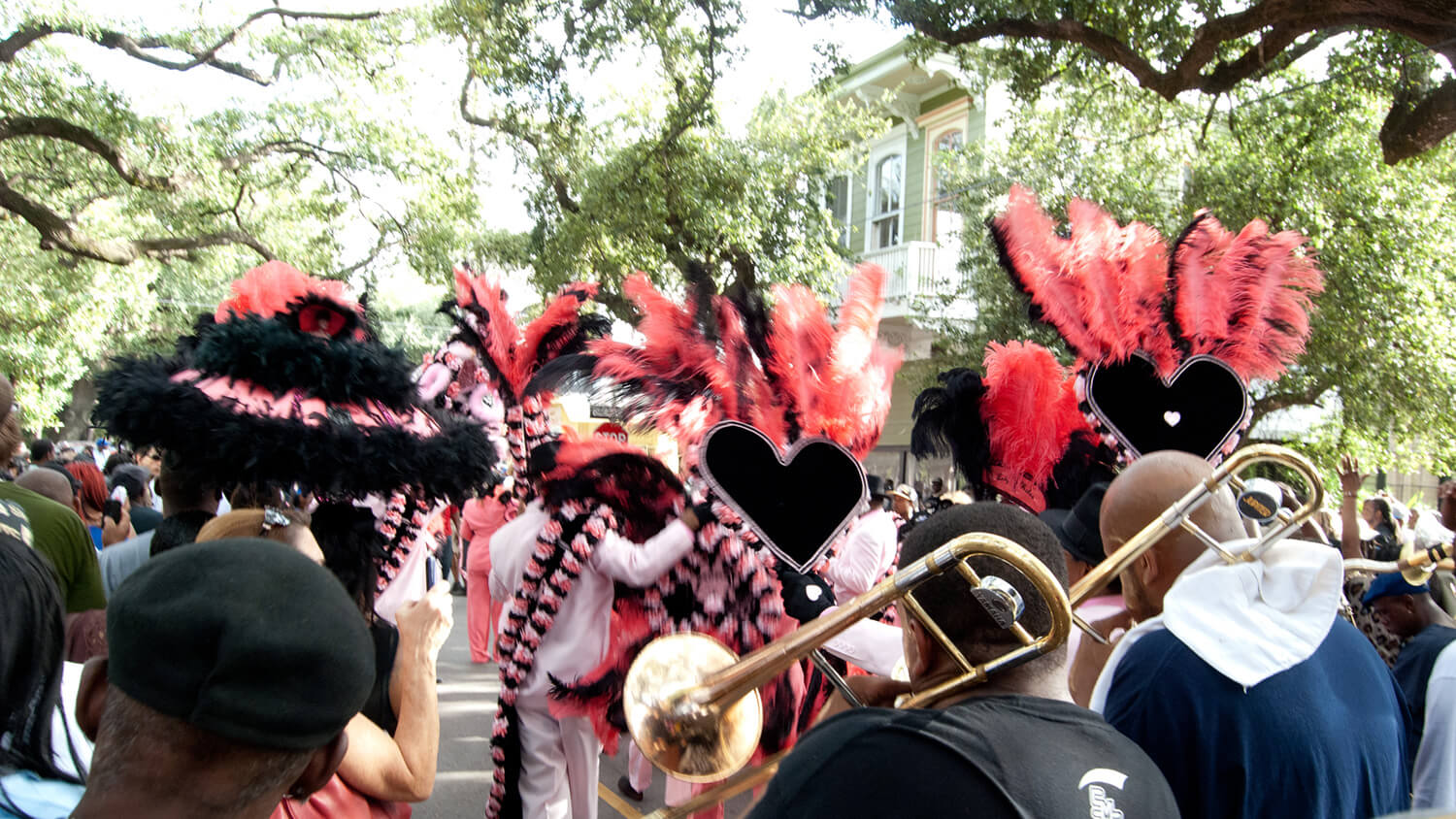 A killing over street turf during a jazz funeral raises the conundrum of New Orleans: how to keep valuable traditions alive while losing the legacies of violence.

Love and Death at Second-Line

NEW ORLEANS — Sixty people stood at the corner of Ursulines and N. Robertson, in front of the ramshackle Tremé watering hole, Joe's Cozy Corner Bar. We were at the end of the second-line for Tuba Fats' huge jazz funeral just over a week ago Sunday. Band members were leaving as conversation and memories of the day grown weary with sad joy wound down. Then above the din came the sounds of a scuffle followed by a single explosion, silence and then screams. My wife with a one-year-old in her arms crouched behind a stoop, others ducked behind cars or ran. I turned to face the corner and saw a man involuntarily throw his hands up and out behind him. He fell slowly onto the small of his back. His legs flew straight up and bounced to the pavement. He writhed as blood poured from his abdomen. More screaming. "He shot that man!" The smell of gunpowder. I saw the shooter in a blur, his familiar face flashed with grim anger and sweat. I felt oddly lucky for all of us. This was going to be a one shot episode. It was not a drive-by, not a drug-induced act, not wanton, not a gang. It was man-to-man — a turf war over beer sales, I'd learn later. I was amazed with how many terms for street shootings we have in New Orleans.

Though I knew it was over, I looked fearfully for my family, who'd scrambled up the street. We carried the baby tightly — more to reassure ourselves — and walked quickly to our car in the Quarter. Cell phones came out, some calling 911, others telling what happened. Word of mouth was that Joe the bar owner had shot the man for selling beer in front of his place. Selling beer?! A man is dying over selling beer? Fear gave way to anger: the cruel stupidity of it, the injustice, the too easy resort to an ultimate solution, the disrespect for life, the ruination of both mens' lives, the danger to family and friends.

The day had started beautiful blue, sunny clear and crisp as thousands gathered by in front of Gallier Hall St. Charles. The great man of the streets, Anthony "Tuba Fats" Lacen was getting the closest thing we have to an official funeral, lying in state at the old city hall, midst portraits of French explorers, colonial potentates, Confederate generals and former mayors. Tuba Fats had made a huge commitment to the tough life of playing mostly in Jackson Square, for parades, wherever the music took him. It was not an easy lifestyle, and after a series of heart problems, he died suddenly two weeks ago at 53. In an interview three years ago for American Routes Tuba Fats acknowledged the difficulty and rewards of the street player's life: "I play on Jackson Square seven days a week. We don't get a lot of money out here. Enough to make groceries and wash clothes, but we like what we are doin'. Music is what I want to do. If you took music from me, it'd be like taken the heart from the body."

Tuba Fats' greatest legacy was not the sound of his horn playing for tips or on parade, but the way he shared his love of music, his ever-changing ensemble and his positive attitude with tourists, natives and musicians alike. So it was that players from the great brass bands were there for the funeral parade: Tremé, Rebirth, Dirty Dozen, and many others. A line of tubas, a man with a red tuba, all the celebrants filled with sorrow, but also exalting Tuba Fats with signs and pictures, in fine suits and fancy dresses, hot colors and cool hairdos. They were alternately somber or cheered as the mood of the music changed: slow dirge, medium hymn, fast march. Probably 2,500 made their way with the horse drawn casket to the French Quarter, down Bourbon Street — a rare honor due to Tuba's daily play on Jackson Square — where tourists gawked and clamored. A somber stop at St. Louis Cathedral, where a priest blessed the bier while those who knew Tuba Fats cried out his goodness. Starting up and out of the Quarter the several blocks long throng sang "Down By the Riverside" with the line "Ain't gonna study war no more" resonating about life here and abroad.

By the time we reached Tremé, the crowd was down to 1000 of the most exuberant still singing in the receding daylight. The casket peeled off while the marchers walked on to the Cozy Corner. I mused with friends over how jazz funerals with their African and European mingled traditions bring so many strangers and friends together to express honor, grief, sorrow, joy, even, humor. A moving fellowship in the streets, the Saints — and soul of Tuba Fats — marching in with us who live on.

I'd been talking to vendors all day — marveling at how they kept the dancing and parading crowd in pie, peanuts, water and especially beer. Outside Joe's a newly arrived vendor, who I'd later read in the obits was Richard Gullette, was feverishly hawking beer and soft drinks, helped by a teenage daughter. I bought a beer from them. Then I accompanied a blind acquaintance into the Cozy Corner to get him to the rest room. As we pushed through the crowded bar to leave, he handed me money to buy him a beer. I said, "It'll be easier at the vendor outside." He said, "No man, this is Papa Joe's place, buy it from him." I waved the bills over my head, Joe himself saw the man, called out to us and passed the bottle over the crowd. Back outside, the blind man lifted his dark shades to reveal scars from a shooting three years earlier that had taken his sight. He dazzled me with his will to learn to live sightless and a few mental tricks memorizing names and numbers. But what's emblazoned on my memory was his warning about the unwritten rules of buying beer when the second-line had ended at Joe's. I now recall vividly speaking with and buying a beer from both the bar owner and street vendor, just minutes before their lives would be forever changed.

As a folklorist I've followed famous songs in New Orleans and elsewhere about murder like the lovers' barroom quarrel in "Frankie and Johnny" or men in a shootout over who's the toughest in "Staggerlee." Even the names of this day's hero and alleged villain, Tuba Fats and Papa Joe, sound mythic. No one can dispute the greatness of the songs, the names, the traditions of a jazz funeral, but we also have a tradition here of too easily resorting to violence whether on the urban frontier or over hunting leases, boat wake, or road rage. The great conundrum of life in New Orleans is: how do we keep the valuable traditions that celebrate the worth of people and their communities, but rid ourselves of equally persistent legacies of violence, corruption, and lawlessness at all levels of society? Tuba Fats did his part to keep the best of tradition and everybody loved him for it. How tragic and ironic that a violent death over street turf had to be the final punctuation on the second-line that honored his life of giving to people in those same streets. 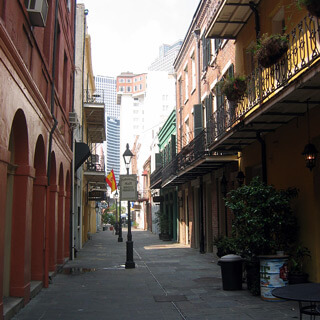