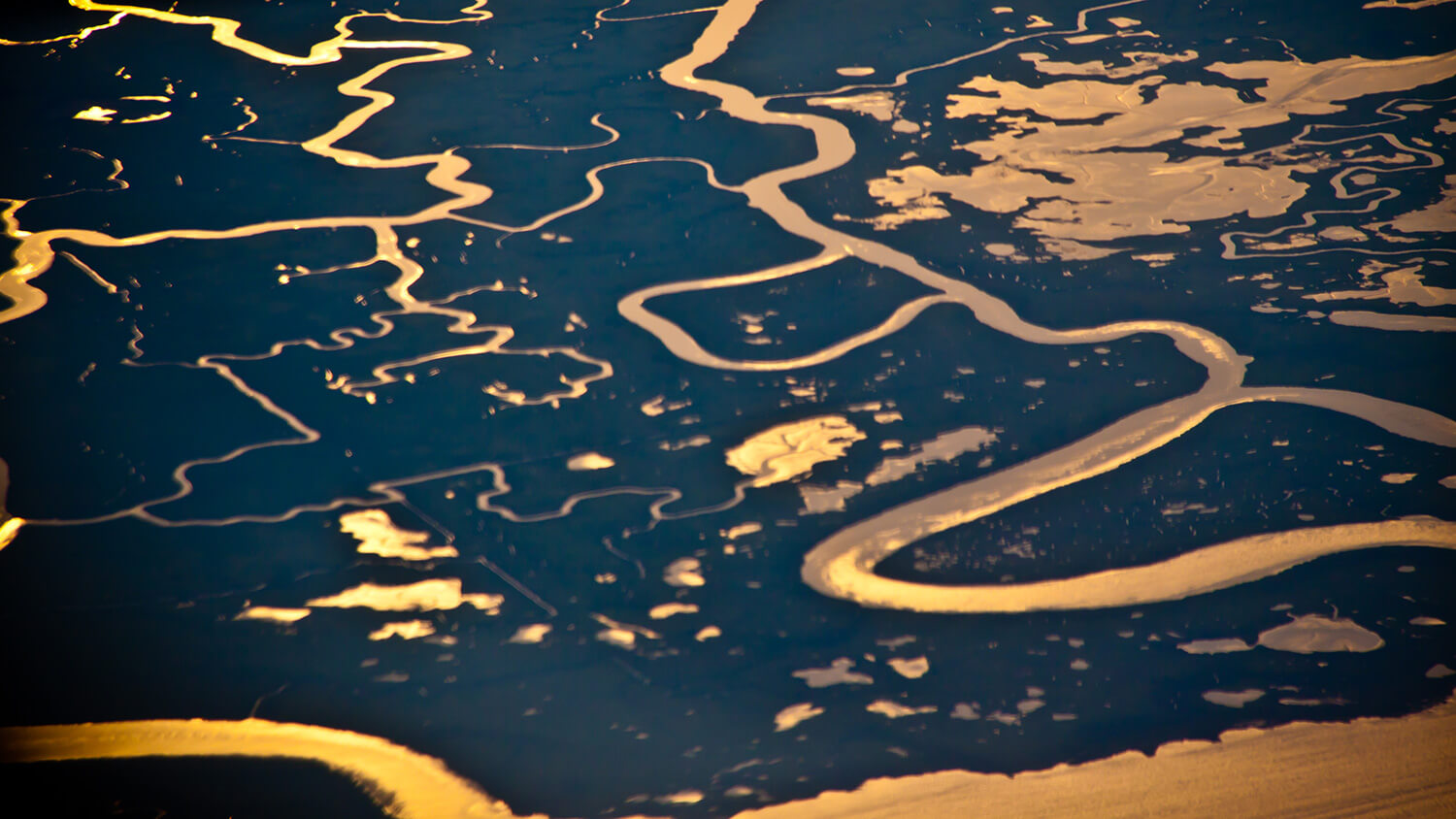 The Chesapeake Bay and the big rivers that feed into it have recently been seen as part of a much larger watershed encompassing six states and hundreds of counties. The Bay's ecology has suffered in the twentieth century, prompting the states that surround it to develop a regional compact to protect it. The Bay's history as a resource and a network for trade extend to Powhatan Society, however, and the Bay's history is marked by regional settlement patterns over hundreds of years.

Some of the most exciting scholarship on the Chesapeake Bay emerged out of a recent series of National Science Foundation-sponsored conferences between historians, geologists, paleobiologists, archaeologists, and environmental scientists. Their interdisciplinary approach to understanding the Chesapeake ecosystem and its history indicates a central commonality across centuries of human presence in the region: the close proximity of natural and human systems and the close interaction between environmental shifts and human societal, economic, and even political change.

The Chesapeake Bay is the largest estuary in the United States and its watershed encompasses parts of six states (New York, Pennsylvania, Delaware, Maryland, Virginia, and West Virginia). The Bay was formed only 10,000 years ago. Its Algonquian name, which means "Great Shellfish Bay," is similarly recent, perhaps only several thousand years old. But, 10,000 years ago the sea level was 325 lower than today and the Atlantic coastline stood 60 miles offshore at the Continental Shelf. The forests were covered in spruce and fir and the Susquehanna River carved its way to the coastline on the Continental Shelf over hundreds of years forming a deep and narrow channel with many tributaries. When climactic change brought warmer temperatures to the region and sea levels rose, the rivers gradually filled in to form the Bay and raise the sea level.

Indians moved into the Chesapeake region about 12,000 years ago and adjusted to a series of environmental shifts in the region. We know that Paleo-Indians hunted in what is now the offshore Atlantic coast since fishermen have recently found Paleo-Indian hunting implements and the remains of extinct species. About 4,500 years ago, a major decrease in the rate of sea level rise made water salinity and temperatures stabilize enough for the growth of numerous species of shellfish and fish. The earliest known shellfish middens in the Chesapeake date back no earlier than 4,500 years ago. Later, Indians began to cultivate corn, squash, and beans 1,000 years ago probably in response to increasingly dry conditions and consequently reduced foods.

What was the Chesapeake like when first European settlers arrived? From the archaeological evidence, several patterns are relevant. First, there were perhaps 30,000-45,000 Indians in 1600 living in the Chesapeake coastal region. They practiced mixed agriculture, lived in villages, hunted deer in the upper coastal plains and Piedmont, and slashed and burned forests to clear land for cultivation. When necessary, they moved to locations with fresh soil. Second, while Woodland Indians had lived for thousands of years in close relationship with the changing environment, they were not conservationists. They cleared lands and moved as necessary, their low numbers making little impact on the available resources (with the significant exception of white-tail deer which Indians had hunted too extensively in the coastal plain). Finally, these peoples were experiencing significant social and economic change when the colonists arrived. Increasing population, conflict over limited resources, and reliance on cultivated crops contributed to the development of territories and chiefdoms. At a major shellfish midden on the lower Potomac, for example, archaeologists found roasting pits first used about 700 years ago, probably to dry oysters for storage and transportation to inland villages. Indian populations were rising and there were probably scheduling conflicts over the use of the oyster beds.

Much of what we know about the Chesapeake before colonization comes from John Smith and William Strachey, who wrote detailed accounts of their travels in the region in the seventeenth century. They often saw the region as a "wilderness, as God first ordained it." They were struck by the forests especially and the density of foliage, and like most Englishmen they considered the land to be "improved" when it had been cleared for cultivation. English visions of the landscape included the introduction of domestic livestock, the first beasts larger than a white-tail deer on the land in millennia.

The Chesapeake's colonial experience with tobacco and the development of slavery marked it as a region of the South. The origins of African slavery in the Chesapeake colony remain obscure, but records indicate the arrival of Africans at Jamestown in 1619 and possibly earlier. Over the seventeenth century as mortality rates declined, planters slowly replaced indentured servitude with enslaved laborers. Largely because of its high rate of mortality in the early years and its turn to slavery and forced labor, the Chesapeake society, especially Jamestown colony, has often been considered an aberration in the founding of the American colonies--materialistic, exploitative, company-driven, profit-seeking, competitive, and unreligious. Some scholars, notably Jack Greene, have argued on the other hand that the Chesapeake society of the seventeenth and eighteenth centuries was far from a "peripheral, much less a deviant area" and instead was "in the mainstream of British-American development."

Over the nineteenth century, the landscape of the Chesapeake shifted again as planters moved from tobacco to wheat and small grain production and then to truck farming crops such as potatoes, tomatoes, and beans. Farmers tilled more land, used nitrogen fertilizers to enhance productivity, and reclaimed wetlands. The development of mechanized agriculture and its widespread practice in the Bay region helped cause the deterioration of the Bay's ecosystem. In the late nineteenth century oyster harvests from the Bay were shipped by rail all over the east coast, and commercial hunters harvested waterfowl for market. Studies indicated that the peak of oyster production on the Bay occurred in the late 1870s when the average annual harvest was 7 million bushels. By the 1920s the oyster harvest was reduced to 2 to 4 million bushels annually until the 1950s. Since the fifties several virulent diseases have crippled the oyster beds, in some years depleting harvest to just 100,000 bushels. Drought, decreases in eelgrass, and other environmental factors took a toll on the region's bird populations. Industrial growth in the watershed combined with population increases in its urban and suburban centers in the twentieth century to put further pressure on the sensitive balance in the Bay's ecosystem. For many historians, environmentalists, and observers, the declension model--from health and balance to sickness and instability--remains the dominant way of understanding and evaluating the ecosystem's history.

Regulation of the resources in the Bay region is certainly not new. Virginia passed legislation in 1669 closing the white-tail deer hunting season and a few years later closed deer hunting to commercial hunters. In the early 1800s Virginia banned dredging for oysters by schooners to prevent the Connecticut boats that had recently arrived from Long Island Sound where they had over-fished the oyster beds there near extinction. When these boats moved up the Bay into Maryland waters, that state responded with regulations prohibiting dredging and requiring in-state registration of vessels. In the late nineteenth century Maryland and Virginia passed numerous regulatory measures concerning oysters, pound nets, and fisheries. Finally, in 1918 Congress passed the Migratory Bird Treaty Act which outlawed the killing of whistling swans and set hunting seasons and bag limits for migratory waterfowl, such as Canada geese, ducks, and rail.

More recently, the Bay has been the subject of one of the largest, most complex intergovernmental cooperative efforts at environmental regulation in American history. In 1965 the Army Corps of Engineers began a long evaluation of the Chesapeake and in 1973 issued its sweeping, multivolume Existing Conditions Report. The report issued some specific results, finding, for example, that industry was by far the largest water user in the Bay Area with a daily use of 1,600 million gallons, nearly double the use for agriculture or the public, and that water quality varied in the region with most of the pollution and problems occurring in the estuaries of the Bay's tributaries rather than in the Bay proper. In its epilogue the report concluded that the Bay's troubles were accompanied by an extraordinarily high standard of living for the residents along its shores and that the harm caused to the Bay has not been "malicious" but instead a result of normal human activity--living, working, and playing in the watershed. The report frankly admitted the paradox that the beauty of the Bay region's watershed and its natural resources and advantages were responsible in large part for the doubling of its population in the 30 years between 1940 and 1970. Finally, the report called for "a regional land and water management plan" and for political cooperation to achieve it.

The Chesapeake Bay Foundation began in 1967 and started to advocate and lobby for, as well as study and research, the Bay and its environment. Its motto, "Save the Bay," evoked the danger that these early environmentalists foresaw for the region and its resources, and it helped persuade citizens of the idea of the Bay as a living entity, something to be rescued from death, not just a reservoir to be managed or conserved. In 1977 William Warner's Pulitzer Prize-winning account, Beautiful Swimmers, of the life and culture of the Bay's waterman and their prized quarry, the blue crab, drew further attention to the changing natural and human patterns in the Bay. The Chesapeake Bay Foundation has grown to over 100,000 members and employs a staff of 175 people dedicated to defending the Bay and its resources from pollution, encroachment, and unrestrained development.

Finally, in 1983 a regional effort to address the Bay's ecosystem started. The cooperative Chesapeake Bay Program partnership includes the Environmental Protection Agency, the states of Virginia, Maryland, Pennsylvania, and the District of Columbia, as well as the tri-state legislative advisory board, the Chesapeake Bay Commission. The 1983 Agreement began with an important recognition among the partners: "an historical decline in the living resources of the Chesapeake Bay and that a cooperative approach is needed." A 1987 revision of the agreement went further in its language, calling the Bay "a national treasure and a resource of worldwide significance" and admitting that "man's use and abuse of its bounty" along with "growth and development" have "taken a toll on the Bay system." The partners recognized that the Bay "transcends regional boundaries" and committed themselves to manage the Bay as "an integrated ecosystem." Finally, in 2000 these partners signed another agreement to work toward restoration and protection through improving water quality in the Bay. The partners in these agreements overcame significant political barriers to intrastate and federal agency cooperation, but there are still critics who argue that not enough has been done to "save the Bay," that the regional cooperation while laudable has been ineffective in too many areas, and that politicians in the region are all too glad to take credit for doing something without being held accountable for results.

Bay Plain and Piedmont: A Landscape History of the Chesapeake Heartland from 1.3 Billion Years Ago to 2000. Washington, DC: National Park Service, 2000.